Lithography giant set to acquire its key provider of light sources in a bid to accelerate move to extreme ultraviolet systems. 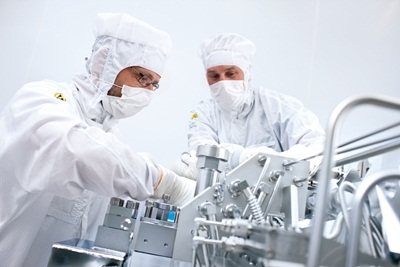 ASML, the world’s leading provider of lithography tools for semiconductor manufacturing, is to acquire Cymer, its key supplier of excimer lasers and extreme ultraviolet (EUV) light sources for the systems.

In a cash-plus-shares deal valued at €1.95 billion ($2.6 billion) that has already been approved unanimously by the boards of both companies, Netherlands-headquartered ASML will acquire the operations, assets and liabilities of Cymer – including its deep-UV excimer laser business.

The price compares with Cymer's overnight market capitalization of $1.49 billion.*

Assuming that both shareholders and regulators approve the agreement, the transaction is expected to close next year. After that, ASML says that it intends to manage Cymer’s commercial operations as an independent division based in the US.

Vertical integration
The prime motivation behind the acquisition is to accelerate the development of EUV technology, which has been held up by the slow development of production-worthy and suitably powerful light sources.

Cymer’s EUV sources are based on a laser-produced plasma (LPP) technology, in which extremely high-power carbon dioxide lasers are used to generate the required EUV output. As a key supplier of that laser technology, Germany’s Trumpf will be one company to benefit from the merger deal, which appears to confirm ASML’s preference for the LPP approach – though officially the company says that its scanners will “continue to interface with light sources from all manufacturers”.

The merger, which is not entirely unexpected, follows the recent equity agreements struck between ASML and its three leading customers – chipmakers Intel, Samsung and TSMC – to raise cash to invest in core research and development of EUV technology and lithography tools suitable for patterning the next generation of 450 mm diameter semiconductor wafers.

As well as providing lots of cash, those agreements had already introduced a degree of vertical integration into the industry that ASML’s acquisition of Cymer will intensify. In fact, the two companies had been collaborating closely on EUV source development for the past year, since it became clear that difficulties in scaling the power of those sources would delay the introduction of EUV lithography.

Peter Wennink, ASML’s CFO, said that the acquisition would “definitely speed up the development” of those EUV sources, and also pointed out that since Cymer and ASML already share a number of suppliers, it should be possible to simplify the combined entity’s supply chain.

The merger could prompt some questions over market domination in the deep-UV laser space, where Cymer competes with Japan’s Gigaphoton, but Wennink stressed that Cymer’s products would remain on the open market following the close of the acquisition, saying: “Cymer products will be available to anybody in the industry and at a reasonable, normal price”. ASML said that it would continue to deliver and service DUV and EUV sources for all customers on an "arm’s length" basis.

105 W production target for EUV source
In a presentation on the merger agreement, ASML reiterated its belief in EUV technology, saying: “EUV is the way forward for the semiconductor industry”, adding that the Cymer deal would also ensure that the development of that technology would now be more efficient.

The company is committed to shipping its first 11 EUV lithography tools to chip manufacturers during 2013, where they will initially go into R&D activity and pilot production. But to hit the kind of productivity levels demanded by those customers in 2014, when volume EUV chip production is slated to begin, sources capable of delivering 105 W of power – enough to pattern 69 wafers per hour - will be needed.

At the moment, the best EUV light sources demonstrated at Cymer have delivered 50 W, while 30 W represents the best performance under what are described as “production conditions”. At 30 W, a productivity level of 18 wafers per hour is possible.

In a joint statement with Cymer announcing the deal, ASML’s CEO Eric Meurice said: “We expect the merger to make EUV technology development significantly more efficient and simplify the supply chain and integration flow of the EUV modules.”

Cymer CEO Bob Akins, whose precise role in the merged entity remains to be seen, added: “We are very encouraged that ASML’s resources will enable the combined company to continue to develop and successfully commercialize EUV on an accelerated time frame.”

“The success of EUV is critical to the semiconductor industry, and we view this merger as very attractive for our shareholders, customers and employees as well as our industry,” Akins added.

Commenting on the current business environment in the semiconductor industry, ASML said that the logic sector, which is led by Intel, should remain solid in 2013, but that demand from the memory sector was “very low”, and would remain subdued for at least the next six months.

* Update: as expected, Cymer's stock rose sharply as US markets opened following the merger announcement. In early trading, shares in the company increased in value by more than 50% to around $75 - a record high, and equivalent to a market capitalization of approximately $2.35 billion.