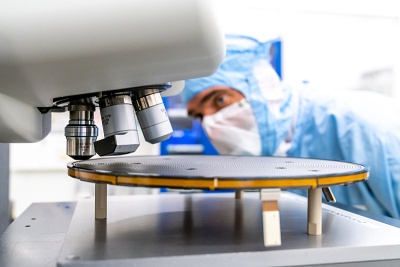 Semiconductor lithography equipment giant ASML remains optimistic about future demand for its tools, despite the gloomy macroeconomic backdrop of war, inflation, and fears of recession - alongside new restrictions recently imposed by US authorities on high-tech exports to China.

The Netherlands-based company, whose deep and extreme ultraviolet (DUV and EUV) wafer patterning tools both rely on lasers and advanced optical technology, has just set more company records for both sales and orders, and now expects to post sales of around €21.1 billion in 2022.

That would represent a rise of 13 per cent on last year’s sales total, and although lower than initial expectations at the start of the year because of supply-chain difficulties, ASML’s executive team said that these were continuing to ease while demand was still strong.

“As a matter of fact, our 2023 shipment demand is still significantly above our build and shipment capacity for next year,” pointed out CEO Peter Wennink in a conference call with investors, also highlighting a backlog now at the remarkable figure of €38 billion.

‘Serious developments’
For the three months ending October 2, ASML generated a net income of €1.7 billion on sales of €5.8 billion, with the totals beating both market expectations and last year's then-record figures. €2.2 billion of the latest revenue figure related to the shipment of 12 EUV tools.

Although Wennink and CFO Roger Dassen are confident of another increase in the closing quarter of this year, they are yet to provide any specific financial guidance for 2023, as the scale of macroeconomic uncertainty grows.

“It’s very clear that the world is changing very rapidly,” Dassen said, pointing to a combination of inflation and hits to consumer confidence. “These are serious developments and create a lot of uncertainty [with] a real chance of a recession.”

Wennink echoed those comments in his investor call, saying that the company would need to maintain flexibility in its supply chain, workforce, and in manufacturing capability, as the various trends unfold.

“You would also expect an impact on customer confidence around their capex [capital expenditure] spending,” said the CEO. “In fact, we do see some customers running at lower tool utilization levels and revising their capex plans for next year.”

Capex adjustments
One company to have already revealed plans to reduce spending is key customer TSMC, the world’s largest semiconductor chip foundry. Last week, the firm’s senior executive team tightened its 2022 capital spending plan by around 10 per cent, to $36 billion.

About half of that reduction was attributed to “capacity optimization” based on TSMC’s latest outlook, with the remainder a result of what it called “continued challenges” with tool deliveries.

However, ASML remains upbeat about its own prospects, thanks to the sheer scale and breadth of demand. “While some customers are now adjusting the desired timing of their demand, the vast majority of our customers are still requesting shipment of their litho systems as soon as possible,” Wennink said, with Dassen adding:

“They are [also] building capacity beyond 2023. And there is still this element of tech sovereignty that we’ve been talking about - the fact that governments want to be more self-sufficient in their semiconductor manufacturing.”

One additional issue now adding to the uncertainty is the new set of export controls imposed by the US on shipments of sensitive and high-technology goods to China.

However, ASML had already been prohibited from selling its cutting-edge EUV tools - where it has a global monopoly - to customers in China, and is hopeful that any additional impact from the latest restrictions will only be felt indirectly.

“Our current expectation of such an indirect impact would be around 5 per cent of our backlog,” Wennink told investors, explaining that this was the proportion of ASML’s backlog of purchase orders from Chinese fabs that were felt to meet the technology criteria indicated in the updated US export restrictions.

AI and supercomputing targeted
TSMC appeared to shed some light on which kind of devices were being targeted, with CEO C.C. Wei saying last week: “The new regulation set the control threshold at [a] very high-end specification, which is primarily used for AI [artificial intelligence] or supercomputing applications.”

It means that currently, like TSMC, ASML expects any impact on its business to be both limited and manageable.

“While ASML is of course fully committed to comply with all applicable regulations, the new regulations do not directly change US export controls on lithography equipment,” Wennink said, adding that the new export control rules are directed at advanced nodes, while ASML’s business in China is predominantly directed at mature nodes.

• Investors appeared to react positively to the latest update, with ASML’s stock price rising in value by more than 5 per cent on the Nasdaq.

That helped to reverse some of the firm’s recent slump in valuation, which has seen ASML stock lose nearly half its value since the start of 2022. Trading at around $420 after the Nasdaq opened October 19, ASML’s stock now reflects a market capitalization of $165 billion.