ASML snaps up Berliner Glas as EUV orders near €10BN 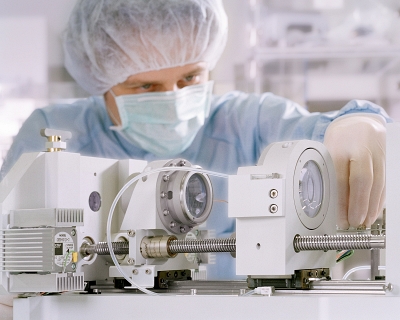 Lithography giant ASML has revealed plans to acquire the optics company Berliner Glas, as it looks to consolidate key component supplies for its highly complex systems.

The Netherlands-based company has just posted solid results for the second quarter of the year, with revenues and profitability bouncing back strongly from the impact of the coronavirus pandemic in the March quarter.

At €3.3 billion for the three months ending June 30 were also up nearly 30 per cent compared with the equivalent period last year, while operating income nearly doubled to €905 million.

Normality returns
ASML’s CEO Peter Wennink paid tribute to the commitment and creativity of ASML’s workforce during the crisis, adding:

“We were able to continue our business and serve our customers during the second quarter. Our operational capabilities are largely back to normal now, but we will remain vigilant as Covid-19 is not yet behind us.”

In fact, Wennink made a clear distinction between the beginning and the end of the June quarter, observing: “The first half we had some supply issues because of lockdowns, absenteeism around the world. But actually, the second half of the quarter came back to normal.”

“We’re in pretty good shape,” he added, notwithstanding any further outbreaks of Covid-19. He also predicted that 2020 would end up representing a "growth year", in terms of both sales revenues and profits.

“EUV is really getting into the realm of high-volume manufacturing,” said Wennink. “It is just becoming part of our normal operational profile.”

“We’re still building out our capacity to 45 to 50 [EUV] systems next year,” Wennink said. “How many will we ship next year? That, of course, [is] also dependent on economic development as a result of the Covid-19 crisis.”

Berliner Glas acquisition
While the CEO admits that the exact extent and impact of the coming recession is impossible to know right now, he does expect to gain some clarity in the second half of this year, in terms of how many EUV systems ASML will need to ship in 2021.

And in a bid to help meet that future demand, ASML has signed an agreement to acquire Berliner Glas. Described by Wennink as a manufacturer of “very high-end” ceramics, optics, and optical modules, the German firm has a relationship with ASML going back three decades.

“[It’s] very important for the future roadmap for EUV and for DUV,” said Wennink of the deal. “We have to go through regulatory approval but we think that can be done over the next couple of months.” The ASML CEO says he expects the acquisition to be completed before the end of this year.

Berliner Glas says that its existing management team will continue to run the company, with contacts for customers and suppliers unchanged. The group’s subsidiaries, including SwissOptic and Berliner Glas Technical Glass, are part of the deal.

Close relationship
Herbert Kubatz, who owns the Berliner Glas Group, said: “We are proud to have contributed to the success of ASML’s lithography technology over the past 30 years, and our collaboration with ASML is already very close.”

Company CEO Andreas Nitze added: “We are excited by the opportunity to make a bigger contribution to innovation in the semiconductor industry as a part of ASML, while we retain the focus to be successful in the other markets that we serve.”

Berliner Glas also serves lots of customers outside the realm of semiconductor equipment, for example in the laser industry, as well as in medicine, aerospace, and displays applications. The company stressed that it intends to continue managing its operations in a way that allows it to service that wide variety of customers appropriately.

• Although ASML’s executive team expects revenues to grow to between €3.6 billion and €3.8 billion in the September quarter, the company’s stock price slipped back a little following the company’s update.

However, its shares are still trading at an all-time high of nearly $400 on the Nasdaq, and have more than doubled in value since the Covid-associated crash witnessed in mid-March. At that price, ASML’s market capitalization stands at some $165 billion.