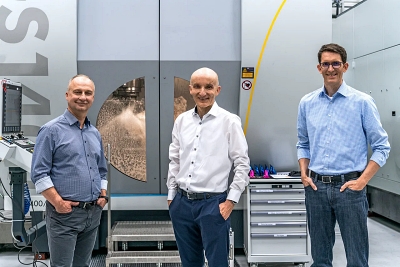 Three of the pioneers behind the development of photonics technology that has made extreme ultraviolet (EUV) lithography possible have won the Deutscher Zukunftspreis (German Future Prize) for 2020.

Peter Kürz from Zeiss, Trumpf’s Michael Kösters, and Sergiy Yulin from the Fraunhofer Institute for Applied Optics and Precision Engineering (IOF) received the award from Germany’s federal president Frank-Walter Steinmeier at a ceremony in Berlin on November 25.

While ASML has now shipped nearly 100 of the giant and hugely costly EUV lithography systems to chip makers, the technology initially proved hugely problematic, and took more than two decades to develop.

State-of-the-art reflective optics from Zeiss and extremely powerful laser sources from Trumpf are critical to the operation of the systems, serving to generate and control EUV light that is created when the lasers are fired at a stream of molten tin droplets in each EUV system’s source.

Industrial maturity
Responding to news of the award Markus Weber, head of the Zeiss semiconductor manufacturing technology (SMT) business unit, said that the award recognized an enormously labor-intensive development effort and technology transfer effort, but that EUV now dominated the global lithography market, with only ASML able to offer the technology.

“Zeiss stands for optical excellence and precision,” Weber added. “This has always been a key factor in chip production. As a breakthrough innovation, EUV technology continues to enable major advances in digitization in business and society. We are proud to contribute to this together with our strategic partners ASML, Trumpf, and Fraunhofer.”

Trumpf’s CTO Peter Leibinger, who has been closely involved in the cooperation with ASML that has proved a major boost for the laser firm’s sales in recent years, commented:

“By combining inventiveness, an understanding of technology, perseverance, and good teamwork, [Kürz, Kösters, and Yulin] are a perfect example of how future technologies can be developed to industrial maturity through strong partnerships.

“The award shows us once again that a strong industry and an outstanding research landscape play a crucial role in meeting the challenges of this century. The mammoth EUV lithography project is also creating jobs during the [coronavirus] year while additionally ensuring that Europe plays a pioneering role in the production of state-of-the-art microchips.”

As VP of the EUV High-NA (high numerical aperture) segment within Zeiss SMT in Oberkochen, Kürz is responsible for developing the next generation of EUV optics, which will use even more advanced optical designs to help shrink further the intricate feature sizes that can be patterned with ASML’s equipment.

Kösters, who heads up Trumpf’s dedicated group working on lasers for semiconductor manufacturing at the Ditzingen company, is acknowledged as the co-developer of the high-performance laser that generates the EUV light.

Yulin, senior principal scientist at Fraunhofer IOF, is responsible for the development of EUV optics, with the research institute playing a particularly important role in the development of sophisticated coatings needed by the large-scale and extraordinarily flat Zeiss components. 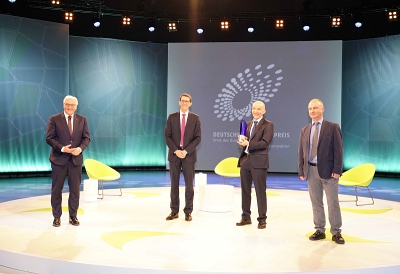 Economic and jobs impact
The economic impact of EUV development is already very apparent. Last month ASML reported that it would fall slightly short of its earlier target of shipping 35 of the systems this year.

However, each of those systems sells for upwards of €120 million - roughly the same price as the latest Airbus A321 airliner.

With demand remaining strong as chip makers gear up to produce chips for the latest 5G smart phones and other key applications, ASML will ship its 100th EUV lithography system before long - although some of those systems will have been used in early development work.

Until relatively recently, many had doubted whether ASML would be able to commercialize EUV technology successfully, with the laser-powered light source proving to be one of the most problematic areas of development.

Key to solving the source problem has been the use of a dual-laser system, which fires an initial “trigger” pulse followed by a much more powerful blast from a giant carbon dioxide laser to generate EUV light from the tin droplets more effectively.

Of ASML’s major customers Samsung and TSMC are already using the technology to produce their latest logic chips, while Intel is expected to start ramping its EUV equipment in the near future.

Production of memory chips, where the economic case for adopting EUV has been less compelling than for logic devices, still lags behind, but this situation is expected to change in the next few years, providing an additional boost to current demand levels.

The impact on Zeiss’ and Trumpf’s business has been notable, with Trumpf saying that more than 3300 jobs have been created at the two German firms, as a direct result of the EUV technology development.

• Presented every year since 1997, and worth €250,000, the Deutscher Zukunftspreisis is one of the highest accolades awarded for scientific achievement in Germany.

Previous winners from the optics and photonics industry have included lasers for large-screen displays in the very first year of the award, super resolution microscopy in 2006 (for which Stefan Hell subsequently won a Nobel prize), LED production advances in 2007, light-emitting organics in 2011, and industrial ultrafast lasers in 2013 (for which Trumpf was again a recipient).