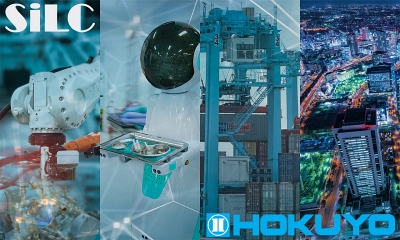 Industrial sensor specialist Hokuyo Automatic has agreed a strategic collaboration with US lidar startup SiLC Technologies that should see SiLC's chip-scale version of the technology brought to applications in machine vision.

Based in Monrovia, California, SiLC is one of a growing band of venture-backed firms working to commercialize frequency modulated continuous wave (FMCW) lidar.

Instead of firing out pulses of laser light and using moving optical components to scan a scene, the FMCW approach employs a continuous, low-power source, and silicon photonics.

Sensing velocity
While the approach is more technologically complex than conventional lidar, FMCW has several potential advantages, including the ability to sense velocity. The hardware can also be produced in extremely compact, low-power packages, compared with pulsed lidar systems.

And although much of the interest in FMCW lidar has centered on potential future applications in autonomous vehicles (Intel’s Mobileye division is looking to deploy the technology by 2025), Hokuyo and SiLC say they are aiming at the next generation of advanced industrial and robotic applications.

“According to a recent study from the Craig Hallum Capital Group, the industrial robotics lidar market is expected to reach $4.5 billion by 2025,” they point out. “The research indicates that the increasing adoption of robots across industrial sectors is leading to the application of 4D lidar-guided machine vision systems.”

Hokuyo, which was set up back in 1946, is regarded a pioneer in automation technology. Company president Hitoshi Ozaki said: “4D lidar will provide longer range, higher precision, instantaneous velocity, and interference-free operation. SiLC is the first company to integrate all of the laser, detectors, and optical processing technology needed to create compact, viable solutions in the market.

“Our collaboration with SiLC enables us to jointly architect an FMCW lidar solution that extends Hokuyo's leadership and customer solutions.”

Silicon photonics
SiLC’s CEO Mehdi Asghari, who was previously a senior executive at silicon photonics developers Kotura and Mellanox Technologies, added: “Industries are eagerly embracing robotic automation strategies. In order for machines to reach their full potential, a highly tuned vision element is needed - and that is where we come in.

“Enabling machines to see more like humans brings forth infinite possibilities. Collaborating with Hokuyo allows us to bring our FMCW technology to market and jointly advance industrial automation and robotics applications.”

Ralf Muenster, SiLC’s VP of business development and marketing, told optics.org that the SiLC technical team has been focused on photonics for the past 25 years, enabling it to develop a proprietary process for manufacturing high-performance optical components at large scale.

“SiLC is the first company to reduce the essential components required for a coherent FMCW system into a single chip,” he claimed. “This chip is mass-producible at scale with common semiconductor equipment. SiLC does this through a proprietary silicon-based semiconductor fabrication process to manufacture its chips on standard, automated IC-style assembly processes, enabling robust, cost-effective, and compact solutions.”

Muenster suggests that the ‘4D+’ product differentiates SiLC from other FMCW developers. “When you add critical vector measurements such as velocity and motion, you get 4D and you help elevate machine perception closer to human visual cognition,” he said. “Our 4D+ Vision Chip also exceeds the performance metrics with polarization intensity, and offers better range, resolution, and accuracy [compared with] existing solutions.”

Laser integration process
At the moment, SiLC is collaborating with strategic partners, like Hokuyo, who have done extensive testing with the ‘4D+’ chip. “We’re getting ready to ship our first product to strategic customers at the end of the year,” Muenster said. “We have been shipping development kits since Q2 last year, and we’re working with several large customers across multiple markets.”

Although SiLC did not specify the precise operating wavelength of its devices, Muenster said that the firm designed and built its own lasers, which operate in short wave infrared (SWIR) spectral band. “We have our own process that integrates the detector and laser,” he added. “Also, we have multiple laser wavelengths available in the SWIR.”

Muenster also points out that, whereas the automotive design cycle is typically now around 3-5 years, some segments within the sector - such as autonomous shuttles, or robotic delivery vehicles - will see volume production earlier than the 2025 timeframe.

“We have been working with some tier 1 [partners] for the past two years already,” he said. “And, certainly, industrial machine vision can go into production much earlier than 2025 - our first product will be shipped [at the] end of this year."