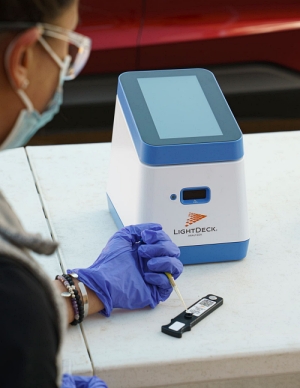 Precision polymer optical component maker GS Plastic Optics (GSPO) is to scale up waveguide production at its facility in Rochester, New York, after winning a supply deal for a new rapid Covid-19 test.

The agreement with LightDeck Diagnostics, which signed a $35 million deal with the US Department of Defense (DoD) to scale production of its antigen and antibody test equipment in July, will see $5 million invested in equipment and facilities at GSPO.

“The funding will allow GSPO to support LightDeck’s increase in production capacity to one million waveguides per month by fall of 2022,” announced the firm. “In addition, the project will create as many as fifteen new jobs on the GSPO optics team.”

Planar waveguides
Under its deal with the DoD, LightDeck is due to scale its own production from 50,000 to 1 million tests per month by September 2022.

The point-of-care test equipment developed by LightDeck is said to yield an accurate result within five minutes, raising hopes that it could be used instead of much more time consuming and costly polymerase chain reaction (PCR) tests to screen for Covid-19.

According to the company, its test platform is based around “advanced planar waveguide technology” that employs inexpensive, disposable test cartridges and a portable analyzer.

Using a fluorescent dye that binds to target molecules, a liquid sample flows onto the waveguide, where a small lens focuses a laser and induces a fluorescence signal that is interpreted as either a positive or negative result.

Core technology
LightDeck says that the core technology underpinning its diagnostic platform was initially developed at Precision Photonics Corporation (PPC), which was set up by Myatt and first focused on applications in optical communications, before being sold to the industrial technology firm IDEX Corporation in 2012, for $20 million.

According to an October 2017 LinkedIn post by Myatt, MBio then developed a waveguide-based platform called LightDeck that improved the accuracy of crude paper-based rapid diagnostic tests thanks to the addition of optics and photonics hardware.

Prior to the Covid-19 tests, the waveguide platform has been used for early detection of toxic algal blooms, and of tetrodotoxin - the poison notoriously found in puffer fish.

Collaborative relationship
Commenting on the LightDeck supply deal, GSPO’s CEO Andy Germanow said: “Today more than ever, our goal is to support the medical community in their great strides to improve the healthcare for our nation.

“Particularly during this pandemic, point-of-care testing is at the forefront of our minds, and we are dedicated to supplying precision components that are built to spec. We are proud to be a trusted partner with LightDeck.”

Nick Traggis, a long-time colleague of Myatt’s who was recently appointed CEO at LightDeck, added: “During the several years we have worked together with GSPO, we have built a trusting, collaborative relationship with their engineering and production teams.

“Their impeccable attention to detail aligns very well with our own product strategy, and they stand as a powerful domestic partner to support the scale of our testing capabilities.”