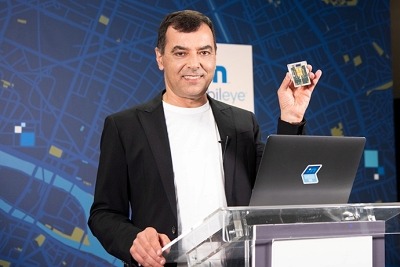 The C-band tunable source, said to be sampling with key customers, emits at around 1550 nm, where more relaxed rules around eye safety mean that a greater power can be deployed by automotive lidar systems compared with shorter wavelengths.

Directly modulated, the laser is said to provide more than 21 dBm (126 mW) of fiber-coupled power, with a narrow linewidth emission that is crucial for FMCW lidars to capture the direction in which objects are travelling, thanks to a Doppler-like shift in frequency.

FMCW advantages
According to their proponents, FMCW lidar designs for autonomous vehicles are superior to the current generation of pulsed, time-of-flight (ToF) lidar systems.

More analogous to coherent radar, the optically coherent FMCW is able to detect both the position and velocity of other vehicles on the road, and requires less power than pulsed systems.

FMCW lidar developers include the likes of Intel, Aeva, SiLC Technologies, Baraja, and Aurora Innovation. They say that as well as the performance advantage, using silicon photonics and PICs means that FMCW technology can be shrunk to chip scale and mass produced at relatively low cost.

However, the technology is also far more complex than ToF lidar systems, and would rely on extremely narrow-linewidth laser sources that enable tiny changes in frequency to be detected.

Intel’s Mobileye subsidiary, which specializes in autonomous vehicle technology, has said it expects to deploy FMCW systems by 2025, with analyst firm Yole Développement anticipating the same kind of time frame before FMCW emerges from the laboratory.

“FMCW is 10-100 times more sensitive compared to pulsed ToF, thanks to coherent detection,” Yole said, while distance accuracy is also superior. However, it added that ToF lidars cannot be easily converted into FMCW, meaning that completely new systems are needed.

A further advantage of FMCW is that individual vehicles can use different modulation patterns - greatly reducing the potential for interference between different vehicles deploying lidar.

NeoPhotonics points out that the tunability of its 1550 nm laser adds another dimension to this. “Tunable FMCW laser sources enable lidars with [a] configurable operating wavelength, thus further enhancing the immunity of coherent lidars to external light interference,” reports the firm.

Phase and amplitude
NeoPhotonics also claims that its sources enable automotive lidar systems to “see” considerably further than the 200 meters generally regarded as a minimum for deployment on vehicles moving at normal speeds on the road, thus offering the potential for enhanced safety.

The PICs in FMCW lidar systems are required to extract phase and amplitude information from the optical signal to determine the position and velocity of other vehicles on the road.

“Narrow linewidth and low phase noise lasers are required for precise phase measurements, and high optical power is required to compensate for optical loss in the silicon photonics optical chips and to provide a sufficient return signal from distant objects for efficient detection,” explains the company, adding that its laser and SOA devices can be used together or separately to optimize the lidar module performance.

Company CEO Tim Jenks added: “We are excited to apply our high-volume photonic integration coherent technology, which we have honed for over a decade, to the adjacent market of lidar and autonomous vehicles.

“The benefits of coherent technology and the physics enabling it mean we can bring the same benefits to customers in these new markets that we have brought to communications customers for many years.”