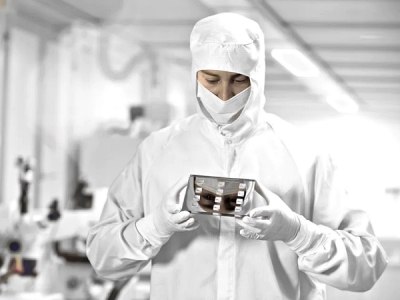 Jenoptik says it will build a new production facility in Dresden to more than double the firm’s production capacity of micro-optics and sensors used in semiconductor equipment.

The company’s photonics division is set to invest around €70 million on a cleanroom and office space at a 24,000 m2 plot of land in the Airportpark area that Jenoptik acquired earlier this year.

Products made at the site will be destined for applications in state-of-the-art extreme ultraviolet (EUV) and deep-ultraviolet (DUV) lithography equipment - a sector enjoying a prolonged boom in demand as chip manufacturers race to address the global shortage of electronic components.

According to Jenoptik, construction is set to begin next year, with production earmarked for 2025. The expansion is also expected to create 60 new jobs.

Silicon Saxony
Jenoptik CEO Stefan Traeger said of the construction plan: “We consciously intend to make the investment for our micro-optics business in Germany, and specifically Dresden, the country’s Silicon Valley, an outstanding location for the semiconductor industry.”

Also referred to as “Silicon Saxony”, the Dresden area is home to a number of major chip manufacturers and volume production sites.

Jenoptik’s Optical Systems division has been based in the region since 2007, producing micro-optics for beam shaping applications in lithography equipment and also laser materials processing.

“Unlike traditional optics, these high-precision components are also manufactured in a process similar to semiconductor production,” points out the firm.

“The new fab will allow us to pool and more than double our on-site production capacity,” added Traeger, with the current staff of 50 expanding by a similar proportion.

“The micro-optics and sensors manufactured here are core components for current and future lithography technologies, enabling more compact chip structures and thus greater computing power with an even smaller design,” noted the firm.

Demand for chips is being driven by the constant expansion in data communications and IT applications, alongside fast-growing markets such as automotive, the Internet of Things, artificial intelligence, and more.

Sustainability certification
Dirk Hilbert, the mayor of Dresden, said of Jenoptik’s planned investment: “The construction of the state-of-the-art facility in Dresden is to further boost Dresden’s appeal in the heart of Silicon Saxony.

“I would like to take this opportunity to assure you of the express commitment of Dresden, the state capital, to support the planned completion of this ambitious project.”

Jenoptik added that as well as meeting the stringent technical requirements for cleanliness and vibration, its plans and designs for the new building also take into account ecological and social aspects – with the company seeking sustainability certification for the project.