US startup says its FMCW lidar imaging chip will enable machines, robots, and cars to see ‘like humans’. 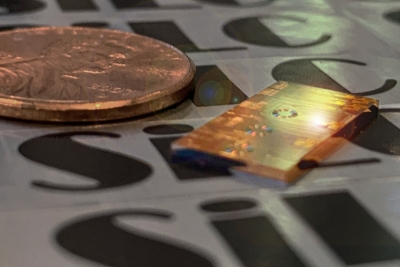 Silicon photonics startup SiLC Technologies has raised $17 million in a venture funding round that is expected to support the launch of a new lidar imaging chip later this year.

The California-based company, founded by CEO Mehdi Asghari in 2018, is one of a handful of companies working on frequency-modulated continuous-wave (FMCW) lidar, which although technologically complex has a number of advantages over pulsed, time-of-flight, and MEMS-based systems.

SiLC had previously raised $12 million in a seed round. The additional cash will help finance an expansion of company operations, and accelerate product development as the firm seeks production design wins.

Vision on a chip
SiLC told optics.org that it was aiming for a formal product launch of its “4D+ vision” sensor later this year, with immediate volume capability.

“Our initial product launch will be optimized for medium-range applications such as industrial, security, and robotics markets, offering unprecedented levels of precision,” stated the firm.

The sensing chip is intended to imitate human-like visual capability, with SiLC claiming “best-in-class” performance in terms of range, resolution, and accuracy.

More specifically, those claims include a precision of 3 mm at a 30 meter stand-off distance, alongside 0.01° angular resolution, and up to 150 meter range.

“A long-range version of this product with up to 300 meter range will follow the initial product launch in the first half of 2022,” added SiLC.

The company also claims that its silicon photonics device will be the only solution on the market capable of adding critical vector measurements like velocity, light polarization, and reflectivity.

“The additional information derived from this data provides context and greatly improves perception of the environment, a breakthrough that has wide-ranging applications for autonomous vehicles, biometrics and security, robotics, and more,” SiLC claims.

FMCW advantages
Unlike conventional lidar, FMCW systems are able to determine the direction in which moving vehicles or other hazards are moving, by picking up a Doppler shift in the frequency of light used to scan a scene.

Other companies working on the FMCW approach include Intel, Amazon-backed Aurora Blackmore, NYSE-listed Aeva, and the Australian firm Baraja, which recently announced an investment by Hitachi Construction Machinery.

“Image processing capabilities of AI systems remain vastly inferior to those of humans, despite the use of massive computing power and high-resolution camera sensors,” said SiLC CEO Asghari, previously VP of research and development at Bookham Technology before taking senior roles at Kotura and Mellanox.

“The key difference is that our visual cognition is based on far more information than traditional image sensors. Our 4D+ vision sensors provide critical additional data and cues needed for efficient machine image processing and visual cognition, much like the human eye does to the brain.”

While industrial lidar applications will be SILC’s initial focus, there already appears to be some traction in the automotive space.

“We have seen tremendous interest from autonomous shuttles and trucks and ADAS L3-L5 [advanced driver assistance for Level 3-5 automation] and are working with a number of key players in this space,” the firm told optics.org.

Varroc Lighting Systems, one of the automotive industry’s key providers of headlamps, is expected to reveal a concept car fitted with SiLC’s 4D+ vision sensors later this summer.

“ADAS will take longer for volume production, but in certain autonomous vehicle and autonomous robotic applications, we expect volume deployment in this space as early as 2023,” predicted SiLC.