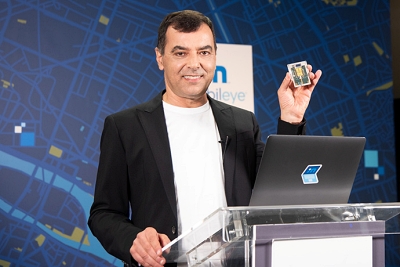 Amnon Shashua, who is also a professor at Hebrew University in Jerusalem, outlined the idea during a keynote talk at the all-virtual Consumer Electronics Show (CES) event taking place this week.

He confirmed that the company would be using lidar developed by Luminar Technologies for robotaxis in the near term - as the two firms had announced in November.

But Shashua also revealed that, by 2025, Mobileye will look to deploy a much more compact alternative based on the frequency modulation continuous-wave (FMCW) approach. The chip-scale lidar system is being developed by an internal research group at Intel.

Redundancy requirements
Mobileye, which was co-founded by Shashua and later acquired by Intel for $15 billion, specializes in camera-based autonomy, and has built a substantial business in advanced driver assistance systems (ADAS).

However, the CEO explained during his CES address that when it comes to autonomous driving, the company strongly believes that lidar and radar subsystems must be used alongside cameras to provide the level of redundancy required for autonomous vehicles to become sufficiently safe for widespread adoption.

The vast majority of lidar systems developed for autonomous vehicles so far rely on the conventional “time-of-flight” approach - where pulses of light bounce off of nearby objects and are collected to build up a three-dimensional map of the potential hazards surrounding the vehicle.

But the Doppler-like FMCW technology is also able to discern velocity information, meaning that the speed and direction of other vehicles on the road can be fed into the autonomous driving system.

A research group at Intel has been working on FMCW technology for some time, and presented early results at last year’s SPIE Photonics West event in San Francisco. Shashua sees that effort - which will exploit Intel’s silicon photonics expertise to fabricate lidar chips incorporating active and passive optical elements - as critical.

“This is really game-changing,” he said, adding that FMCW lidar based on a photonic integrated circuit (PIC) with 184 vertical lines is expected to be available by 2025. “Having fabs that are able to do that, that's very, very rare. So this gives Intel a significant advantage in building these lidars.”

Instead of fusing inputs from cameras, radar, and lidar sensors to “see” the highly dynamic environment around a moving vehicle, Mobileye’s strategy is to generate two independent viewing channels - one created by the camera suite, and the second from a combination of radar and lidar data. In theory, this should make autonomous vehicles far safer than cars driven by people.

Luminar for robotaxis; FMCW later
While the lidar-on-a-chip system is still being developed, and higher-level autonomy remains some way off, Mobileye will be working with Luminar to provide better ADAS features and lower-level autonomy in production vehicles.

“The way we are thinking about it is that consumer AV [autonomous vehicles] will take some time - we believe it’s going to be the 2025 timeframe,” Shashua said. “If we want to start practicing, we need to start with the robotaxi - because robotaxis are less price sensitive, in terms of the self-driving system.

“Then we can build this radar-lidar subsystem in parallel to the camera subsystem. The robotaxis are going to be based on Luminar lidars, and a cocoon of radars around the car.”

Mobileye has adapted another vehicle featuring only lidar and radar sensors, without any cameras on board, that Shashua says has the same performance level as the camera-based subsystem.

“At the end of the development, at the moment before we launch, we will put the two subsystems together,” said the Mobileye CEO.

Turning to the longer-term outlook, Shashua described FMCW as a “technological leap”, and an area where Intel has a major advantage because of its silicon photonics expertise - in terms of both fab capacity and intellectual property.

“We have a team that has been working for quite a long time on building the next-generation lidars - [and] we’re targeting this 2024/2025 timeframe,” he added. “We believe that by 2025, [alongside a cocoon of imaging radars] one front-facing lidar would be sufficient.”

Shashua believes that the cost of that lidar/radar subsystem, along with the accompanying camera subsystem, would then be sufficiently low for volume production in consumer autonomous vehicles.