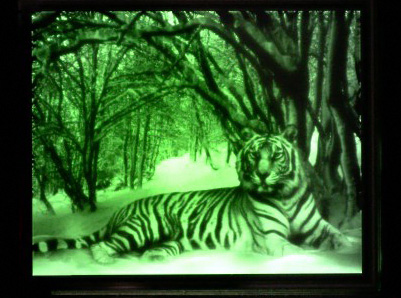 Combined with superhigh contrast, states Kopin, the new HDR OLED microdisplay is suitable for use in ambient scenes ranging from dark night to bright daylight.

‘Half the power demand of equivalent LCD displays’

The duo-stack structure provides increased current efficiency, which leads to much higher brightness, lower power consumption; “about half of that of LCD displays of equivalent brightness,” says the developer. It also offers a longer lifetime compared to conventional single-stack OLED devices.

“We believe this new HDR OLED display has achieved previously unattainable brightness levels together with long operating lifetime,” said Dr. John Fan, CEO of Kopin. The device was developed in partnership with “a leading customer”, and target markets include automotive and aircraft displays and medical imaging systems.

Fan added, “The achievement of high brightness and long lifetime coupled with a wide luminance range is a culmination of the OLED technology we have been developing over the past several years.

“The performance levels of the initial builds of this display, which we believe have never been achieved before in OLED microdisplays, is a milestone in the development of our displays targeted for emerging AR and VR applications. We are now working to achieve much higher brightness – approaching 100,000 nits.”

Bill Maffucci, Kopin’s GM for Government & Professional Products, commented, “Our OLED microdisplays have reached, for the first time, the luminance levels of current LCD displays used in high-brightness AR applications. In addition, these new displays offer 14-bit HDR operation that has never been achieved in either OLED or LCD microdisplays.”