Atlanta-based Skully Technologies says it has developed the world’s 'most intelligent motorcycle helmet'. 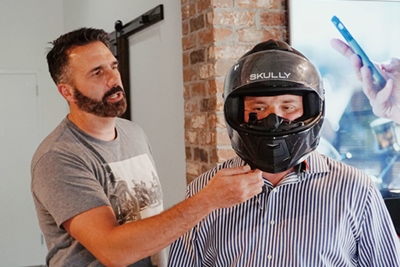 Kopin, the Massachusetts-based microdisplays company, has revealed that its technology is behind what is claimed to be the first commercial “smart helmet” for motorcyclists.

The augmented reality (AR) headgear, available since September after making its global debut at the Consumer Electronics Show (CES) event in Las Vegas earlier this year, combines a near-eye head-up display with a rear-view camera and voice control.

Ivan and Rafael Contreras, cousins who in 2017 resurrected the Skully Technologies brand after the company went bankrupt under its prior ownership, describe their $1899 “FENIX AR” product as the world’s most intelligent motorcycle helmet, offering bikers a combination of increased safety and “optimal connectivity”.

Consumer crossover
The low-power, high-brightness, WQVGA microdisplay selected by Skully for the FENIX AR offers a resolution of 428x240, says Kopin. Its expertise includes both organic LED (OLED) and liquid-crystal on silicon (LCOS) designs, as well as related optical components.

“Kopin’s renowned industry-leading expertise in microdisplays and optical technologies was very evident to us when choosing a near-to-eye display,” said Skully CEO Ivan Contreras. “[The] WQVGA display is a key feature of the FENIX AR smart helmet, and plays a significant role in increasing rider safety while also improving the riding experience.”

Greg Truman, who heads up Kopin’s industrial and enterprise division, added: “We are delighted that Skully Technologies has chosen our WQVGA LCD for its smart motorcycle helmet.

“We have a long and rich history of developing products for augmented reality applications for the military. Now you are seeing these products moving into industrial and consumer markets to improve worker productivity, safety and increasing the joy of an experience.”

The Westborough firm has already shipped tens of millions of LCD-based microdisplays, and added OLED capability to its portfolio around two years ago, under a new fabless business model that sees it partner with OLED foundries.

In the company’s quarterly results announcement earlier this month, Kopin’s CEO John Fan said that next year he expected the firm to ship 100,000 display modules to “enterprise AR” customers for their smart glasses designs.

“We expect to ramp shipments in 2019 as the product moves from testing to full production,” he told investors. “We are also seeing significant order increases from other enterprise headset customers, reflecting the expanding interest from companies across many verticals that are seeing the benefits of AR.”

Tariff challenges in China
Among Kopin’s blue-chip customers is the US military, with the company shipping displays for the F-35 Joint Strike Fighter program. Applications in armored vehicles and state-of-the-art weapon sights are also in the pipeline.

However, Fan added that although the company was currently witnessing very strong demand for AR smart glasses, the ongoing trade war between the US and China was having a negative impact.

“While enterprise AR is gaining traction, it is certainly a challenging time for virtual reality VR/AR consumer wearables, especially for VR, which is going through a reassessment,” he said. “Further complicating the issue is the tariff situation with China, which we believe negatively affected our results this quarter, particularly the demand from Chinese customers that buy our components for drone applications.”

So far this year, Kopin has posted an operating loss of $29 million on sales of only $16.7 million. A November 26 “S-3” prospectus filing with the US Securities & Exchange Commission (SEC) suggests that the company is looking to bolster its balance sheet with additional cash.