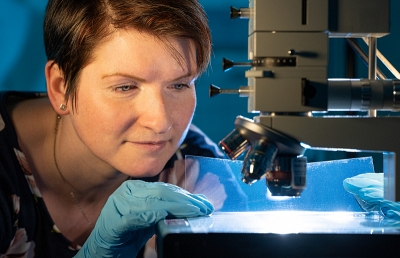 Researchers at the Fraunhofer Institute for Material and Beam Technology (IWS) in Dresden have come up with a novel approach to optical inspection that promises to improve production of organic electronic devices like OLED screens and flexible solar cells.

Inspired by progress made under the “OLEDSOLAR” European research project, the IWS team says that its hyperspectral imaging technology is able to check the quality of barrier foils used in organic device manufacture far more quickly than is currently possible.

Combined with artificial intelligence, the so-called “imanto” system is said to be capable of detecting tiny defects in the foils that can make the devices more susceptible to water vapor transmission - a key attribute that determines the useful lifetime of a product based on organic electronics.

“The previously unthinkable measurement possibility can give an enormous boost to the development, production and application of barrier foils and thus to the entire organic electronics industry,” states the team.

“Barrier foils have indeed been in use for a long time, for example in the food and pharmaceutical industries. In these areas, the protection of sausage, coffee, cheese and other products against moisture, bacteria, or loss of flavor really has always been a priority.

“But organic electronics have made the requirements for the permeability of such barrier foils with respect to water vapor extremely stringent.”

For example OLEDs - now commonplace in smart phone and TV screens - require foils with a water vapor transmission rate of only a few micrograms of water vapor per day. The problem is that checking the transmission rate is difficult, with conventional metrology of OLED barrier foils often taking several weeks to deliver a result.

Fraunhofer IWS scientists say that with the hyperspectral approach that inspection time for barrier foils in organic electronics has been reduced to just two to three hours.

Foil permeability
Under the €7.9 million “OLEDSOLAR” effort, 16 project partners are collaborating on advanced manufacturing and inspection methods to help industrialize organic electronics production. The project is scheduled to run until spring 2022.

The new approach for barrier foil metrology pioneered under the project focuses on the permeability of the foil itself, rather than measuring the water vapor that is able to penetrate the barrier.

Working on samples fabricated using a roll-to-roll process at the Fraunhofer Institute for Organic Electronics, Electron Beam and Plasma Technology (FEP), the hyperspectral data was compared with high-precision measurements of water vapor transmission taken in the usual way.

That information was then used to generate and train an artificial intelligence model that is able to predict water vapor transmission rate of the barrier foil with sufficient accuracy but, crucially, hundreds of times faster than is possible using the standard method.

“No human could evaluate this data conventionally,” points out Grählert. “That's why we apply artificial intelligence methods.”

When deployed in an industrial setting, the model would learn correlations between scratches, layer defects, and inclusions that impact foil permeability - meaning that faults could be identified immediately.