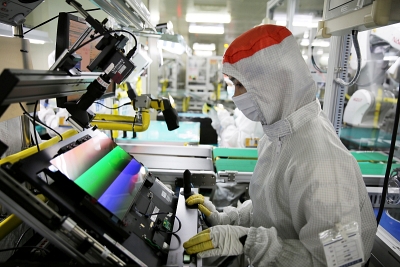 Universal Display Corporation (UDC), the Nasdaq-listed New Jersey company that has pioneered the development of light-emitting materials for organic LED (OLED) displays, is predicting a sharp increase in revenues this year as the technology finds new applications in larger screens.

CEO Steve Abramson and colleagues said last week that they expect to post sales of between $530 million and $560 million in 2021 - a figure that would represent a rise of 25-30 per cent on the 2020 total.

That surge pushed total revenues for the fourth quarter to $142 million - up 39 per cent on the same period in 2019 - while pre-tax income of $66.7 million rose 80 per cent over the same period.

Going large
Looking back on a successful but inevitably challenging year, Abramson highlighted a new long-term deal signed with China Star Optoelectronics - the country’s second-largest maker of display panels - and the establishment of a new equipment-focused subsidiary, in the form of OVJP Corporation.

“The [OLED industry] ecosystem continues to grow with new capacity, new products, and new customers,” the CEO told an investor conference call, adding that big-hitters Samsung and HTC were both looking to push OLED adoption further.

“Early last month, Samsung announced [that] its 2021 lineup of OLED laptop displays will include over ten new models,” Abramson pointed out. “Samsung is also forecasting a 500 per cent increase in annual sales for its OLED IT panels this year.”

He estimates that only around 1 per cent of the market for laptops, tablets, and display monitors currently uses OLED screens - meaning that there is huge scope for market share gains, if the technology is available at the right price.

With LG Display also expected to ramps its OLED TV shipments from around 4.5 million units last year to as many 8 million units this year, it appears that the consumer electronics industry is finally making a concerted move towards adoption of OLEDs in larger-format displays.

“OEMs such as LG Electronics, Sony, Vizio, Skyworth, and more than a dozen others are fueling this tremendous growth,” observed Abramson, adding that LG Display was also looking to make serious inroads with OLEDs in the automotive sector.

Equipment strategy
Having established the OVJP equipment subsidiary last summer, UDC is busy expanding its US operations, with facility renovations now under way in both Ewing, New Jersey, and in California.

“We are ramping our OVJP efforts in Silicon Valley to scale our novel manufacturing platform, with the first milestone being an alpha system in 2022,” Abramson told investors, adding that the company was already seeing strong interest from both customers and potential partners.

Short-hand for “organic vapor jet printing”, the OVJP technique is described by the firm as a “groundbreaking” dry direct printing technology for depositing organic materials to manufacture 4K and 8K resolution OLED TVs.

Heading up the OVJP subsidiary is Jeff Hawthorne, who was previously the CEO at displays test and repair equipment maker Photon Dynamics, before becoming senior VP of the metal-organic chemical vapor deposition (MOCVD) business at Veeco Instruments.

“UDC was founded with the mission to enable the OLED industry,” said Abramson last year, announcing the formation of the OVJP equipment business.

“We began with the idea of energy-efficient, high-performing phosphorescent OLED emissive technology and forged a path of discovery, development and delivery to now a broadening portfolio of commercial UniversalPHOLED materials. We are now taking the idea of dry printing OLED TVs in a vacuum environment and accelerating its commercial path.”

• Despite the positive outlook and an increase in UDC’s quarterly cash dividend from $0.15 to $0.20 per share, the company’s stock price has slipped back in value in the days following the latest results announcement.

But after closing at just under $210 on the Nasdaq on February 23, UDC remains close to long-term highs, with a market capitalization in the region of $10 billion.