Laser cooling takes the heat out of optical tweezers 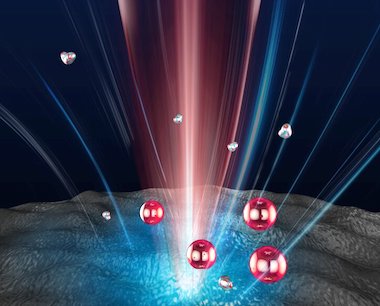 Optical tweezers are a versatile way to trap and manipulate particles and untethered biological cells, exploiting the intensity gradients that can be created by focused lasers.

One problem, however, has always been the potential for the material being manipulated to suffer thermal damage or overheating while at the focus point of the beams.

A project at the University of Texas at Austin has now developed a possible solution, by creating optical tweezers which remove heat from the target rather than supply it. The results were published in Science Advances.

"Optical tweezers have many advantages, but they are limited because whenever the light captures objects, they heat up,” said Yuebing Zheng from the University's Walker Department of Mechanical Engineering. "Our tool addresses this critical challenge. Instead of heating the trapped objects, we have them controlled at a lower temperature."

Previous approaches to counteracting the inherent heating effects have included exploiting near-field and plasmonic effects to allow reduced optical power, or incorporating thermo-hydrodynamic forces alongside the optical elements to trap objects away from the laser beam itself. None are wholly satisfactory.

The Texas project's solution is opto-refrigerative tweezers (ORTs), in which the temperature gradient created by the tweezers is nonuniform, and the object being manipulated sits at a laser-generated cold spot.

According to the project's published paper, an architecture involving a 1020-nanometer laser directed at a substrate of Yb-doped yttrium lithium fluoride (Yb:YLF) was developed. The laser wavelength induces anti-Stokes fluorescence in the doped crystal, with photon emission at a shorter wavelength and internal cooling of the nanocrystals, creating the temperature gradient.

Because the ORT principle relies on a temperature gradient field, a weakly focused laser operating at lower intensity can still produce the tweezer effect, further reducing the potential for thermal damage to the cells being studied.

The team measured effective temperature drops of 6 to 10 K in its system, depending on the exact conditions, creating a thermal gradient which can be used to drive particles and molecules to the cold spot and trap them at the laser beam center.

One application of the new approach could be the analysis of DNA molecules. Manipulating DNA is commonly carried out by attaching glass nanobeads to the protein and then using optical tweezers to act on the beads, according to the Texas team, since the proteins themselves would be readily damaged by the laser. ORTs could remove this requirement.

Future work will include developing autonomous control systems for ORTs, making them easier to use without specialized training and extending the tweezers' capabilities to handle biological fluids such as blood and urine. The project is also working to commercialize the discovery.

"This novel and noninvasive optical tweezing technique will bring new possibilities in the optical control of nanomaterials and biomolecules for essential applications in nanotechnology, photonics, and life science," said the project in its paper.