With organizers the Consumer Technology Association (CTA) estimating that 20,000 new products were launched at the giant CES 2016 event in Las Vegas this week, to say that sorting the wheat from the chaff represents a challenge is clearly something of an understatement.

What does seem apparent this year is that advances in drones and virtual reality headsets attracted the global media’s attention, and that much of the automotive industry now classifies itself as a sub-sector of consumer electronics.

It'e certainly the case that plenty of the innovation on show in virtual reality, drones and cars is now based on optics and photonics technology. Consider that Zeiss, one of the very oldest names in optics, made its CES debut at this year’s event. Like many, Zeiss was showing off a new virtual reality headset – in its case, the “Zeiss VR ONE”.

Zeiss VR One hands on! Google Cardboard was never this cool https://t.co/IewC0FmMFT pic.twitter.com/osQoGWr1BS

It may not have generated the same media acreage as Oculus Rift, but according to the German firm the smartphone-based platform boasts a “premium” immersive experience, including a 100-degree view, thanks to the incorporation of its own precision optics.

Hitting another of the CES 2016 touch points, Zeiss is targeting applications in UAVs, its VR ONE set up to allow users to experience the view from inside the cockpit of a drone.

“This delivers a unique experience, flying from the drone’s point of view via a live video stream,” claimed the firm. “As the user’s head turns, the camera point of view changes on the drone.” 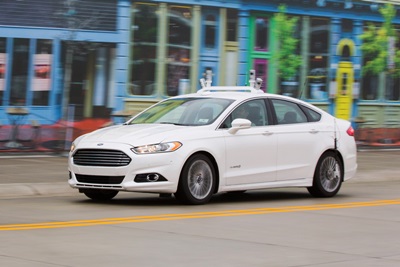 Lidar for the Fusion Hybrid

Automobiles
From drones to cars, and senior executives from both Volkswagen and General Motors gave keynote talks in Las Vegas.

Herbert Diess attempted to salvage some of VW’s diesel-tarnished reputation with talk of “new Volkswagen” and – in a clear sign that cars now fall under the consumer electronics umbrella – described the new e-Golf Touch as a “smartphone on wheels”.

But in terms of optics-driven automotive innovation, it was perhaps Ford that made the most significant announcement.

Revealing that it was extending its fleet of research-level Fusion Hybrid autonomous vehicles (pictured here) from ten to around 30, the US car maker highlighted the importance of a new lidar sensor that has a longer range than earlier versions.

Crucially, the latest design does allow Ford to reduce the number of lidar sensors on its autonomous vehicles from four to two, while cutting overall costs and collecting just as much useful data.