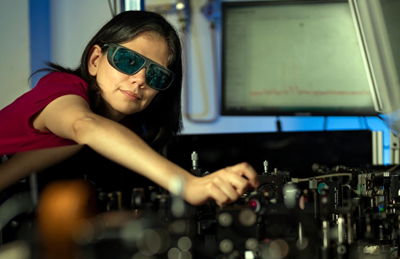 Researchers from the Australian National University (ANU), based in Canberra, and an international team of partners have developed a new technology that allows people to see clearly in the dark.

The thin film, described in SPIE's Advanced Photonics, is “ultra-compact and one day could work on standard glasses,” the researchers say.

The new prototype tech, based on nanoscale crystals, could be used for defence, as well as making it safer to drive at night and walking home after dark. The team also say the work of police and security guards, who regularly employ night vision, will be easier and safer, reducing chronic neck injuries from currently bulk night-vision devices.

Lead researcher Dr Rocio Camacho Morales said, “Our technology is able to transform infrared light, normally invisible to the human eye, and turn this into images people can clearly see - even at distance. We have made visble the invisible.

“We've made a very thin film, consisting of nanometre-scale crystals, hundreds of times thinner than a human hair, that can be directly applied to glasses and acts as a filter, allowing you to see in the darkness of the night.”

The technology is extremely lightweight, cheap and easy to mass produce, making them accessible to everyday users. Currently, high-end infrared imaging tech requires cryogenic freezing to work and are costly to produce. This new technology works at room temperatures.

“This is the first time anywhere in the world that infrared light has been successfully transformed into visible images in an ultra-thin screen,” said Professor Neshev. “It's a really exciting development and one that we know will change the landscape for night vision forever.” 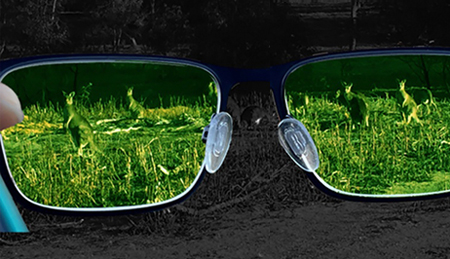 The new technology has been developed by an international team of researchers from TMOS, ANU, Nottingham Trent University, UNSW and European partners.

Mohsen Rahmani, the Leader of the Advanced Optics and Photonics Lab in Nottingham Trent University's School of Science and Technology, led the development of the nanoscale crystal films.

He commented, “We previously demonstrated the potential of individual nanoscale crystals, but to exploit them in our everyday life we had to overcome enormous challenges to arrange the crystals in an array fashion. While this is the first proof-of-concept experiment, we are actively working to further advance the technology.”