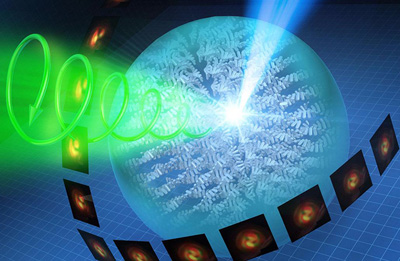 Researchers from the University of Tsukuba, Japan, have experimentally tested a long-presumed, yet never confirmed, light-emission hypothesis on a molecular level, with applications in many advanced optical technologies.

Holographic displays help add a three-dimensional—and thus more life-like—feel to what would otherwise appear as a two-dimensional image. Now, researchers in Japan have tested how this may work on a supramolecular level; such tests could lead to improved displays.

Certain materials make use of the principle of chirality to rotate light in a plane perpendicular to the direction of the light wave, known as circular polarization. Understanding how such materials work may help researchers develop, for example, advanced holography or optical coding.

Researchers have long postulated that helical molecular assemblies, upon being illuminated, emit circularly polarized light in a spatially anisotropic manner that depends on the three-dimensional morphology and orientation of the assemblies.

However, this orientation presumption has not been conclusively tested on a molecular level. Doing so should help researchers develop improved displays and better understand the optical principles that underlie such displays.

In a study recently published in the Journal of the American Chemical Society, researchers from the University of Tsukuba demonstrated the spatial distribution of circularly polarized light emitted from a micro-spherical molecular assembly composed of a chiral polymer.

“The constituent polymers spontaneously aggregate with each other in a helical manner with a micro-spherical morphology just by slow diffusion of methanol vapor into a chloroform solution of the chiral polymer,” said Professor Yohei Yamamoto, senior author. “This is essential to imparting maximum macroscopic order to the polymer assemblies, which is unattainable in solution or thin-film states.”

Polarized optical microscopy imaging of the microparticles revealed the helical, or spiral-like, structure. From these microscopic observations, the team deduced that the atomic-scale chirality of the polymer defined the "handedness" or direction of the spiral texture of the microparticles. Picking up a single microparticle and observing it while rotating it in various ways confirmed this deduction

“The spatial distribution of the circularly polarized fluorescence from individual particles substantially lacks rotational symmetry,” said Professor Yamamoto. “This is attributable to the three-dimensionally anisotropic molecular stacking of the polymer that constitutes the microparticles.”

Biological organisms frequently use helical stacking to fold proteins or nucleic acids--biological polymers. Such folding may be useful in computer algorithms, drug delivery, and other technologies

Professor Yamamoto concluded, “Researchers could be inspired by our findings to incorporate three-dimensional color readout into nano-scale objects. In the meantime, there is a versatile new tool for studying how one can use molecular structure to enhance the spatial properties of computer displays, lasers, and other everyday technologies.”