Penn State integrates photodetectors with Gorilla Glass for use in sensing and infrastructure. 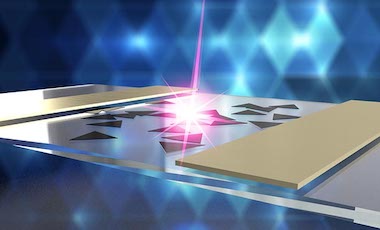 Photodetectors, already a feature of multiple industrial systems as well as consumer devices and smart phones, could reach new markets thanks to a project at Penn State.

A collaboration between the university's Materials Research Institute and Corning has successfully integrated photodetectors with Corning's Gorilla Glass material, potentially leading to the commercial development of "smart glass" equipped with automatic sensing properties.

As reported in ACS Nano, the breakthrough employed atomically thin layers of molybdenum disulphide (MoS2), a photosensitive material that can already be directly integrated into current metal-oxide semiconductor (CMOS) structures and its performance manipulated by various structural and chemical enhancements.

"There are two problems to address when attempting to manufacture and scale photodetectors on glass," said Saptarshi Das of Penn State. "It must be done using relatively low temperatures, as the glass degrades at high temperatures, and must ensure the photodetector can operate on glass using minimal energy."

The choice of molybdenum disulphide as the material used helped to tackle the first problem, since it can be processed at a temperature of 600 degrees Celsius, low enough not to damage the Gorilla Glass onto which the photodetector was being fused. The next step was to turn the glass and coating into a photodetector by patterning it using a conventional electron beam lithography tool, with aluminium oxide as the top-gate dielectric.

This manufacturing process circumvented the challenges associated with the nucleation of oxides during the ALD operation, noted the project team. The ultra-thin body of the molybdenum disulfide photodetectors allows for better electrostatic control, and ensures it can operate with low power - a critical need for the smart glass technology of the future.

"These photodetectors need to work in resource-constrained or inaccessible locations that by nature do not have access to sources of unrestricted electricity," Das said. "They need to rely on pre-storing their own energy in the form of wind or solar energy."

In trials, the Gorilla Glass-based material was exposed to green LED lighting, so as to mimic a more natural lighting source than the laser illumination sometimes used to characterize photodetectors.

The results showed that the material could detect low-intensity visible light at high speed and low energy expenditure of 100 picoJoules. In addition the project recorded "low device-to-device performance variation across the entire substrate and aggressive channel length scalability," both key factors for the practical use of ultra-thin molybdenum disulphide photodetectors on glass.

The project builds on previous work at Penn State into the versatility of molybdenum disulphide on other substrates. In September 2020 Saptarshi Das's group reported the ability of a photodetector based on the material to detect ultra-low-intensity subthreshold optical signals from an LED, exploiting a stochastic resonance principle used in the natural world by animals in low-light environments. This could be used in military contexts or undersea locations.

The new Gorilla Glass breakthrough could ultimately lead to technology advances in a number of sectors across manufacturing and engineering, according to the researchers. Biomedical imaging, security surveillance, environmental sensing, optical communication, night vision, motion detection and collision avoidance systems for autonomous vehicles and robots could all benefit.

"Smart glass on car windshields could adapt to oncoming high-beam headlights when driving at night by automatically shifting its opacity using the technology," commented Penn State's Joshua Robinson. "And new Boeing 757 planes could utilize the glass on their windows for pilots and passengers to automatically dim sunlight."