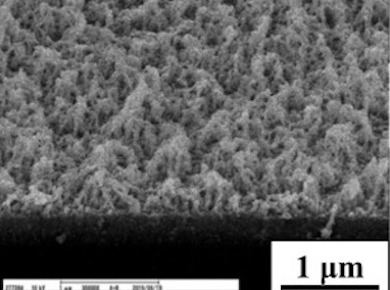 Surface reflection, a critical property for solar panels and smartphones as well as other screen-based technologies, is closely related to the surface structure of the material concerned.

A project at Tokyo University of Science (TUS) has designed a manufacturing process intended to create nanostructures on resin films able to suppress reflection over a range of wavelengths and incident angles. The work was reported in Micro and Nano Engineering.

The design of the nanostructures is based on those found in the eyes of moths, continuing the development of bio-inspired materials that exploit the fine control of reflection and optical properties found in the natural world.

Recent examples of this technology transfer have included investigating the effect of nanostructures based on butterfly wings on the performance of solar panels, and light-emitters designed to mimic the design of compound eyes so as to control angular illumination.

Use of bio-inspired materials in real-world applications, however, will require scalable manufacturing operations able to produce them in large quantities at acceptable quality. Multiple applications could then open up if such nano-structured films could be manufactured at the meter scale.

"We could use these films to improve visibility in flat panel displays, digital signs, and the transparent acrylic plates used everywhere since the start of the COVID-19 pandemic," commented Hiroyuki Sugawara of thin-film specialists and TUS project-partner Geomatec. "Moreover, anti-reflective coating could also be an efficient way to improve the performance of solar panels."

No trade-off in optical properties

Each individual optical unit, or ommatidium, of the nocturnal moth is covered with anti-reflective structures (ARS) formed by an array of 200 to 300-nanometer sized pillars, which simultaneously reduce the reflection of light and enhance night vision capability.

Previous work at TUS led to the creation of similar moth-eye structures using an oxygen ion beam to modify a glassy carbon substrate, but this approach is not best suited to large-scale manufacture.

"Producing glassy carbon substrates requires the use of powder metallurgy technology, which is difficult to use to produce molds with a large area," said Jun Taniguchi of TUS. "To overcome this limitation, we tried using only a thin layer of glassy carbon deposited on top of a large regular glass substrate."

Examination by electron microscopy showed that the ICP approach had produced nanostructures 770 or 960 nanometers in height on the 2-micron-thick glassy carbon surface, depending on the experimental conditions.

These treated materials were then used as the master mold material for production of moth-eye film, with the nanostructures being created on the surface of a 5.7-micron thick photocurable resin.

"The optical properties of this film are remarkable," said TUS. "Its reflectance toward light in the visible range was only 0.4 percent, ten times lower than that of a similar film without the moth-eye nanostructure. The transmittance of light through the material was also increased, suggesting that no trade-off in optical properties as a result of using the film to reduce reflected light might be needed in industrial applications."