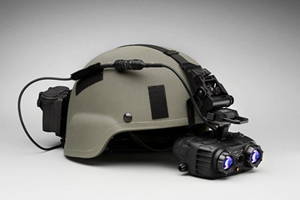 Intevac Photonics says it has won another $8.1 million contract to provide a new generation of augmented reality (AR) night-vision goggles for the US Army.

The Santa Clara-based firm will develop the “Delta 1” goggles over the course of two years. They are set to be used by special operations forces from the US, UK, Canada, and Australia.

In a statement Timothy Justyn, executive vice president and general manager at Intevac Photonics, pointed out that the AR-enhanced goggle system would be the first to feature the company's latest generation of sensors.

He added: “This award continues to demonstrate Intevac’s commitment to delivering the latest digital night vision technology to our warfighters.”

Active pixels
That new technology is the firm’s latest electron-bombarded active pixel sensor (EBAPS). Based around a compound semiconductor photocathode and a silicon CMOS anode, EBAPS is designed to provide night vision in extremely low-light conditions.

“The electrons emitted by the [III-V] photocathode are directly injected in the electron-bombarded mode into the CMOS anode, where the electrons are collected, amplified and read out to produce digital video directly out of the sensor,” Intevac explains on its web site.

The result is state-of-the-art digital night vision in a compact, lightweight, low-power and low-cost package that eliminates the more complex and bulky designs more typically associated with image intensifier assemblies.

EBAPS works across the visible spectrum and out to around 1.7 µm in the near-infrared.

In addition to the US Army contract, Intevac Photonics has landed a $3 million order from giant defense contractor Northrop Grumman for its “M506 LIVAR” cameras - based on a slightly different version of the EBAPS technology.

Short for laser illuminated viewing and ranging, the LIVAR is described as a compact imager that enables system integration with an eye-safe laser illuminator to range and view images of targets at distances of up to 20 kilometers.

“The system works day or night, regardless of available light,” states the company. “The illuminator is an eye safe laser and the reflected light is displayed as a digital video image. This enables real time, high-resolution imagery for target identification at much longer ranges than was previously possible.”

Growth market
Parent company Intevac, which comprises the photonics business unit and another focused on thin-film equipment for making displays and hard-disk drives, told an investor forum earlier this week that broader uptake of night-vision technology by the US military and its allies should provide a significant boost to its sales over the next few years.

Its investor presentation indicated that total company revenues should tick up to around $108 million for 2019 - of which approximately one-third will relate to sales from the Intevac Photonics business unit.

Company managers are hopeful of increasing that total annual turnover figure to $250 million in the medium term, with the photonics division’s contribution growing to around $100 million on the back of the opportunities in night-vision technology.