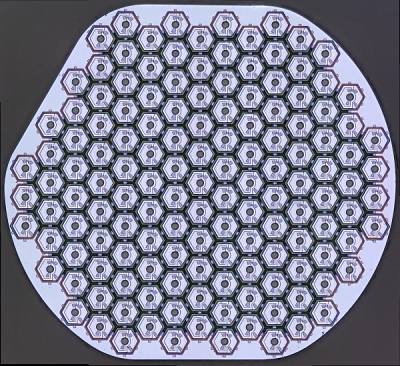 The first of an expected 38 patients suffering from dry age-related macular degeneration (AMD) - a common but untreatable condition leading to blindness - has received an experimental retinal implant in a new clinical trial.

Pixium Vision, the French company behind the “Prima” implant, says that if successful the latest trial of the system would represent the final clinical hurdle before it can apply for market approval in Europe.

Yannick Le Mer, one of the study’s principal investigators and a retinal specialist at Fondation Adolphe De Rothschild Hospital in Paris, said in a Pixium release:

“This first successful implantation in the PRIMAvera pivotal trial is an important milestone for the Prima System and patients suffering from dry AMD. The Prima System has shown very encouraging results so far, and I am looking forward to seeing confirmation of these life-changing effects in dry AMD.”

Visual combination
Last month the company reported “compelling results” from an earlier trial in France showing for the first time that the level of central vision restored by the Prima implant combined well with patients’ remaining peripheral vision.

In a pre-print paper submitted to the Nature family of high-profile scientific journals, co-author Daniel Palanker and colleagues report on four patients who received the implant.

“Simultaneous use of the prosthetic central vision and the natural peripheral vision in both the implanted eye and the fellow eye is a very important feature of the Prima System for patients with geographic atrophy, and is essential for improving their quality of life,” said Palanker, a Stanford University professor who is also a Pixium advisor.

All four patients also showed a visual acuity exceeding 20/100 (marginally better than the legally blind definition), while the trial confirmed the safety and stability of the implants over a 24-30 month follow-up period.

Ongoing trials
The PRIMAvera trial is initially scheduled to run for four years and is open to patients older than 60, while a concurrent study in France has already shown an average improvement in visual acuity equivalent to five lines on an optometrist’s vision chart.

Pixium is also in the middle of an earlier-stage trial of the Prima System on five patients in the US, with initial results anticipated by the end of this year.

Company CEO Lloyd Diamond said of the latest developments: “Pixium Vision continues to deliver on its transition from a research organization to a commercial one.

“The Prima System has demonstrated excellent results in improving vision which will correlate to [patients’] ability to undertake day-to-day tasks, and has the potential to make a significant difference in the quality of life of patients suffering from dry AMD, who currently have no treatment options.”

Second Sight deal off
Meanwhile Pixium has recently aborted plans for a business combination deal with US-based Second Sight, which is also developing a form of bionic vision for blind people suffering from the condition retinitis pigmentosa.

Back in January the two companies had revealed details of the plan, which would have given Pixium better access to the potentially lucrative US market and envisaged new funding of $25 million seen as critical to the firms’ survival while the technology remains at the pre-market stage.

However, last month Second Sight revealed that it had separately agreed a private equity placement of nearly $28 million. According to Pixium that transaction was prohibited by the memorandum of understanding (MoU) previously agreed by the two firms.

The French firm claimed that although it offered Second Sight an opportunity to renegotiate that MoU, the US company refused to enter into discussions - with Pixium describing the deal's subsequent termination by Second Sight as “unilateral and wrongful”.

“Consequently, Pixium Vision will consider all measures available (including any legal proceedings, in particular with the relevant stock exchange authorities) to preserve its rights and obtain compensation for its entire damages,” it announced.