Analysis includes details on commercialization of first microLED displays, which are “around the corner”. 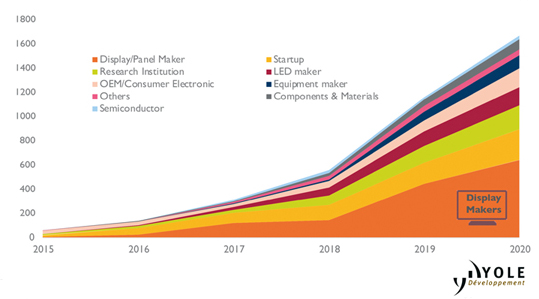 In its latest analysis of the microLED sector, in the April 2021 report MicroLED Displays – Intellectual Property Landscape and Analysis, Yole Développement, the Lyon, France-based market research company expands on the following highlights:

Considering the intellectual property landscape in relation to the development of these displays, Yole reports on the following:

“Activity is strongly dominated by Chinese companies, followed by Korea. LG and Samsung made strong showings in 2019 and kept up the pace in 2020 in terms of new applications,” Virey added.

Samsung has made a remarkable push with more than 130 new patent families, revolving for the most around its Display division’s self-assembled nanorod LED technology, often referred to as QNED. The patents show the technology maturing, and a commitment to tackle the challenges associated with moving QNED from the lab to the fab.

In this context, Yole has investigated disruptive technologies and related markets in depth, to point out the latest innovations and underline the business opportunities. 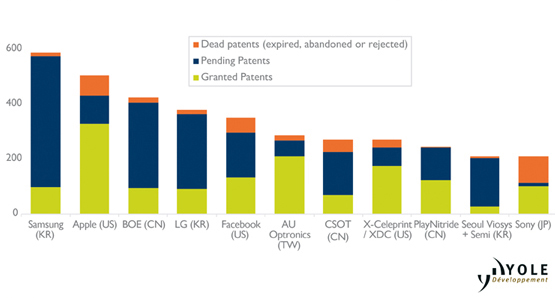 The China-based giants China Star Optoelectronics Technology and BOE Technology led patenting activity in 2019 and remained close to the top in 2020.

With similar levels, Taiwan-based startup PlayNitride, which raised another US$50 million in 2020 to expand capacity, plays in the same league as leading panel makers and OEMs, concludes Yole.

Grenoble, France-based Aledia, which moved into a new R&D facility in 2019 and raised close to US$95 million in 2020 to build a fab, is also accelerating its IP effort, says Yole, inching closer to historical leaders such as XDisplay, based in Cork, Ireland and Research Triangle Park, NC, USA.

Eric Virey added, “This field is getting crowded but there is still time for ambitious newcomers to build credible portfolios. In late 2019 and early 2020, Konka and Visionox announced plans to invest $365 million and $175 million, respectively, in mini and microLED development and production ramp ups. Konka only filed its first microLED patent in 2019 and Visionox in 2017, but both already have sizable portfolios of pending applications, some showing a surprising level of maturity”.

Considering other notable players, the report summary concludes, “Related activity at Apple peaked in 2017. However, the quality and details of new applications shows how far the company’s technology has advanced. The acquisition of Tesoro indicates a focus that is shift or expansion toward enabling volume production rather than fundamental technology development. TSMC, which is expected to be one of Apple’s key partners, appears for the first time in Yole’s corpus.”