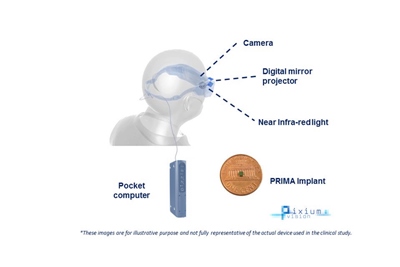 Clinicians in France have reported the first surgical results of a new retinal implant developed by Paris-based Pixium Vision, declaring “excellent stability” in the first patients to trial the technology.

Speaking at the EURETINA conference in Vienna on September 21, principal investigator Yannick Le Mer from the Fondation Ophtalmologique A. de Rothschild presented details of the surgical procedure to implant Pixium’s “PRIMA” device, and initial results following the surgery.

Le Mer told the event: “The wireless photovoltaic chip PRIMA could be safely implanted under the atrophic macula without post-operative decrease in residual peripheral vision in all five patients who lost their central vision due to dry-age-related macular degeneration (dry-AMD).

“The PRIMA chip elicited light perception in all patients. The rehabilitation program helps them improve the quality of visual perception. The study continues, and we are confident in successfully demonstrating positive feasibility study results.”

‘Tiny solar panels’
The latest implant from Pixium has been developed in the hope of restoring a level of vision to people suffering from a disease that is now a leading cause of irreversible blindness globally. Dry-AMD progressively destroys the light-sensitive cells in the macular - the central, “high-definition” element of the retina - leaving patients with only peripheral vision.

A wireless photovoltaic chip with 378 electrodes, PRIMA measures just 2x2 millimeters in area and is 30 µm thick. Pixium says that when implanted under the retina using minimally invasive surgery, it acts like an array of tiny solar panels.

The chip is powered by pulsed near-infrared light from a miniature projector integrated within a pair of augmented reality glasses, along with a miniature camera to capture imagery. “PRIMA is designed to restore some vision in patients blinded by retinal dystrophies – a very significant unmet medical need,” says the firm. “The target population includes patients with atrophic dry AMD, and also retinitis pigmentosa.”

In addition to the clinical trial with five atrophic dry-AMD patients in France, PRIMA is approved for a study on five patients in the US.

Pixium Vision says that the dataset reported in Vienna demonstrated both safe implantation of PRIMA, and successful activation of the damaged central retina, enabling the first patients to receive the implant to identify various visual patterns – said to include bars, letters and numbers.

Pivotal study planned
The Vienna report represents an interim update at an early stage of the intervention, with important milestones in terms of long-term functionality and stability still to be demonstrated over the course of the three-year study. Previous efforts with different designs of retinal prostheses have suffered from degradation owing to problems with encapsulation of the electronic devices, for example.

As the rehabilitation and assessment of the first few patients to receive the PRIMA inplants continues, Pixium says that the full set of six-month interim results of the French feasibility study should be completed by the end of this year.

“This will enable the design of the protocol for a larger multi-center European pivotal study, required for the CE-mark [European Union regulatory approval] to commence early in 2019,” added the firm.

In the US, where Pixium has gained approval for a feasibility trial at the University of Pittsburgh Medical Center, another five patients are scheduled to receive PRIMA implants, starting this month.

Earlier this year the company completed a €10.6 million rights issue, and has also activated a separate equity line to raise a further €3.3 million. The additional cash shored up the Paris-listed firm’s balance sheet, which at the end of June showed €16.7 million in cash assets.

Although it is not yet generating sales of its retinal implants, Pixium does generate some revenues in the form of grants and research tax credits. For the first half of 2018, it posted a net loss of just under €3 million.

• Meanwhile Second Sight, a US-based company also working on retinal prostheses, has received grant funding from the National Institutes of Health (NIH) that could be worth a total of $6.3 million over the next five years.

An initial tranche of $1.6 million will support clinical testing of the firm's "Orion" implant in five patients, with the company's CEO Will McGuire saying:

"We are delighted to be working with the researchers at the NIH and are deeply appreciative of this grant as we aim to advance Orion and work toward commencing a final clinical study to gain FDA approval. With this grant, we are one step closer to bringing Orion to a broader market that potentially treats a segment of the millions of blind individuals worldwide who have no other option."