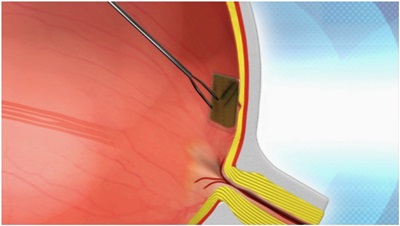 Pixium Vision, a small Paris-based company that is working on retinal implant technology designed to restore sight to blind people, has closed a €15 million extension to its “Series A” round of financing.

The deal, which follows a €9.5 million round closed in May 2012 and should ensure that initial clinical trials of the implant can be completed, was led by US venture group Sofinnova Partners. As a result, it becomes the company’s largest investor. Also taking part were investment group Bpifrance, via its InnoBio fund, and existing venture partners Omnes Capital and Abingworth LLP.

Co-founded just two years ago by Bernard Gilly and José-Alain Sahel, spinning out of the Vision Institute in France and building on a close relationship with the National Eye Hospital in Paris, Pixium is developing a sight-restoring technology based on a 49-electrode epi-retinal array of sensors.

Designed to generate an image of some 120 pixels, the first generation of that "IRIS" technology is currently in early clinical trials in France, Germany and Austria, with the first results expected in 2014. After final data is collected in 2015, the company hopes to secure CE Mark approval to commercialize the device.

Gilly and Sahel have had previous success with Sofinnova. In 2005, they set up Fovea Pharmaceuticals, a company focused on treating ocular diseases that was sold to the Paris-headquartered healthcare giant Sanofi just four years later.

As a result of the extended funding round, Antoine Papiernik from Sofinnova Partners and Chahra Louafi at Bpifrance have joined the Pixium board of directors. Stanford's Daniel Palanker is an advisor to the firm.

Photoreceptor replacement
As well as supporting clinical trials, the new Pixium funding will be used to further advance the retinal implant, which is designed for patients who have lost their sight through degenerative conditions like retinitis pigmentosa and age-related macular degeneration.

Combining expertise in neural processing, microelectronics and computing, it is designed to replace the function of photoreceptors in the retina.

The IRIS technology is based on an intra-ocular implant placed surgically into the eye and attached to the surface of the retina. Patients wear spectacles containing an integrated camera and wireless transmitter, with captured images processed into a signal that is transferred back through the spectacles and projected onto the retinal implant to stimulate the optic nerve and generate an image.

Pixium says that the brain learns to interpret the signals it receives from the implant during a structured rehabilitation program undertaken by patients fitted with the system. 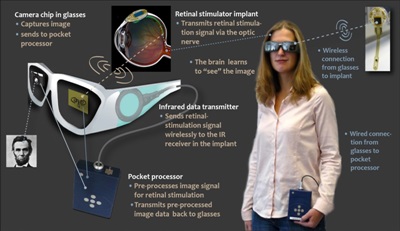 Regulatory approval sought
Pixium’s CEO Gilly said: “Our investors’ support will enable us to complete the clinical study with IRIS1, which if positive will allow us to seek regulatory approval in the coming two years.”

The new funds will also be used to drive the development of a more advanced "neuromorphic" camera and implant system that it is hoped will eventually restore a much more natural form of sight to blind patients and enable them to lead much more independent lives.

Pixium is one of a handful of companies working on similar ocular implant technologies. Earlier this year, optics.org reported on the different approaches being taken by California’s Second Sight and Germany-based Retina Implant.

Early results from a clinical trial by Retina Implant have shown some remarkable results, with some kind of vision restored to nine patients in Germany who had been fitted with its “Alpha IMS” implant. However, the surgery required to insert the implants is invasive, while some devices failed and it has been acknowledged that the hermetic sealing of the implants must be improved.

Second Sight’s “Argus II” epiretinal implant, which has received approval from the US Food and Drug Administration, has also shown promise in clinical trials.

Investor Papiernik, who is a managing partner at Sofinnova, said of the Pixium deal: “Over the years we have developed a strong relationship with Bernard Gilly and José-Alain Sahel. After Fovea Pharmaceuticals, which Sofinnova Partners backed right from the beginning, we are thrilled to join Pixium and continue to support such a high quality team.”

“Pixium’s innovative technology bears the promise to make a real impact on the lives of these completely blind patients suffering from retinitis pigmentosa or age-related macular degeneration. It is a great privilege to be associated with such a paradigm-shifting company.”