ASML hooks up with Heriot-Watt on laser commercialization 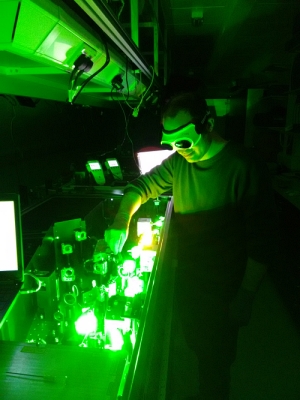 Researchers at Heriot-Watt University in Scotland have agreed a five-year partnership with semiconductor lithography equipment giant ASML, with the aim of commercializing new laser sources.

The collaboration will focus on work within the laboratory of Professor John Travers, initially looking to create a direct route to market for lasers in metrology applications.

Travers’ group is working on new broadband light sources for optical metrology, with several ideas said to have been patented already.

Related work indicates how ultrashort pulses - including down to the attosecond regime - and infrared light can be produced from a similar setup.

Real-world challenges
Travers said in a release from Heriot-Watt: “The type of optical components used in recent research previously sat in the domain of fundamental physics research. Working in close cooperation with ASML is rapidly moving our work in the direction of the industrialization of this technology, where we are addressing specific engineering challenges, and applying the technique to create real-world impact.

“My research into fundamental physics can be used by ASML in an industry setting. So often in academia, the focus is on advancing the science and impressing our peers. However, through this industrial partnership, we are addressing specific real-world engineering challenges, with industry and academia learning from each other.”

Although ASML’s primary interest in the sources under development are likely to be related to deployment in semiconductor production, other applications are anticipated in healthcare technology and precision manufacturing.

Whether lasers for such applications could be brought to market by a company other than ASML is not clear - Heriot-Watt declined to give any further details about the exclusivity of the deal, and whether it precludes any university spin-outs from commercialization efforts.

“ASML has a long tradition of close partnerships with academia. Our collaboration with Professor Travers and Heriot-Watt University will complement ASML’s research agenda, supporting our technology roadmap. This group at Heriot-Watt is one of the leading groups in the world working on these kind[s] of light sources and has a track record on innovations.”