Laser company says it will reveal way to combine ultrashort pulses with fiber delivery at LASER: World of Photonics event. 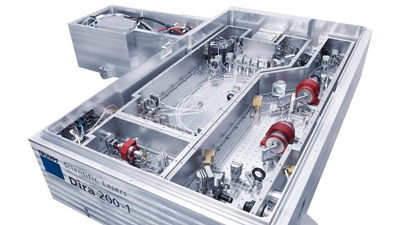 Germany-headquartered laser and machine tool company Trumpf says that it will unveil a new way to integrate ultrashort-pulsed lasers with fiber delivery at next month’s LASER: World of Photonics show in Munich.

In a pre-show company announcement Trumpf Laser’s managing director Klaus Löffler said that the “game-changing” development promised a revolution in the field, by overcoming the problem that ultrashort pulses tend to ablate and damage the glass out of which optical fibers are typically made.

“In Munich, Trumpf will present a technology study that has the potential to revolutionize laser material processing with ultrashort pulse lasers,” teased the company, with Löffler adding:

“Some 30 years ago, the first laser light cable suitable for industrial use proved the breakthrough for solid-state lasers; our new beam guidance concept promises to do the same for ultrashort pulse lasers today.”

Thermal effects minimized
Because it transfers energy to a target material in such a short time, an ultrafast laser pulse generates only minimal thermal effects - offering enormous potential for extremely precise “cold” materials processing, without any distortion caused by melting.

However, the incompatibility with conventional glass fibers, coupled with the relatively high cost and less robust nature of the technology compared with other sources means that those advantages are yet to transfer to industry in significant volumes.

Trumpf’s current line-up of laser products includes the “TruMicro” series, which features nanosecond, picosecond and femtosecond pulse sources. Femtosecond versions of the “TruMicro 5000” laser offer up to 125 µJ energy with a 900 fs pulse, and an average output power of 120 W.

Attosecond pulses
Aside from the ultrashort pulse delivery technique, Trumpf says that it will debut a diode laser said to offer sufficiently good beam quality for industrial applications beyond soldering, hardening and deposition welding, as well as the second release from its new generation of disk lasers for industry.

The company’s disk-based "Dira" series of laser amplifiers for scientific applications will also be showcased on Trumpf’s large (600 m2) exhibition booth in Munich.

This technology, based on cutting-edge research by Ferenc Krausz and colleagues at the Max Planck Institute of Quantum Optics in Garching, delivers picosecond pulses with up to 200 mJ of energy – and can be used to generate so-called “few-cycle” pulses in the attosecond regime.

Special models with a pulse energy up to the joule level or average powers of a kilowatt are also available upon request, says Trumpf, which set up the Scientific Lasers venture with Krausz and colleagues back in 2012 and showed initial products at the LASER 2013 event.

• The latest instalment of LASER World of Photonics will also include a “Start-up World” exhibit in Hall B3 of the giant trade show, enabling companies that are less than five years old to take part at reduced cost.

The founders of some of those new companies will also be taking part in the Photonics Award competition – won by the Swiss firms Nanolive and Femtoprint in 2015, when it was held for the first time.