$750k funding to develop infrared sensor for pollutants including nitrates and ammonia; similar detectors for E. coli may follow. 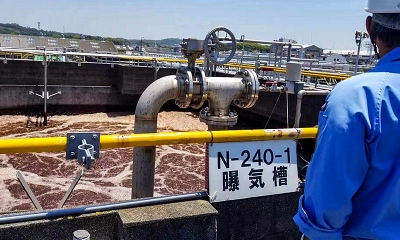 The Dallas firm says that the “Phase II” grant - awarded via the US National Science Foundation - will also support initial field tests of the device, which promises to reduce the energy costs associated with a critical wastewater treatment step by 20 per cent or more.

Aerobic biodegradation
In wastewater treatment facilities, these pollutants are dealt with by blowing air into the water, which enables naturally occurring bio-organisms to break down the pollutants aerobically.

However, that aeration step turns out to be an energy-intensive process, and according to Max-IR is responsible for more than half of the electrical energy consumed by a typical wastewater treatment plant.

Currently, water samples have to be taken manually and sent to a laboratory for analysis - with the inevitable delay in generating results. Real-time sensing would enable the “blower” settings for the aeration step to respond immediately to contaminant levels, potentially reducing electricity consumption by one-fifth.

“Implementation of Max-IR sensors in wastewater treatment process controls will result in enhanced efficiency, reducing energy consumption and lowering operation costs,” states the firm, which was founded in 2017 by current CEO Katy Roodenko.

More specifically, the economic impact is estimated to be worth around $200,000 in average energy savings per year for a typical wastewater treatment site, with a likely pay-back period of just six months.

Evanescent waves
During last year’s SPIE BiOS Symposium, the Max-IR team outlined the ISMIR technology, and how it could help to optimize water treatment processes.

“Efficient nitrogen removal is one of the key objectives of any municipal wastewater treatment operation, yet today, nitrogen is monitored through grab-sampling and sending samples to laboratories for analysis,” they explained. “The [QCL nitrogen] sensor will enable reliable, real-time, unsupervised sensing in a harsh environment.”

One of the obvious challenges faced by such a sensor, they added, is the strong absorption of infrared radiation in water. To overcome this, the QCL output is transmitted through a waveguide in contact with water - instead of through the water - in such a way that an attenuated total reflection (ATR) mechanism can be implemented.

In an abstract outlining the latest project, the Max-IR teams expands on that, stating: “The technology addresses strong infrared attenuation in water with the first industrial-scale sensor application based on a fiber-optic evanescent wave technique, guiding mid-infrared radiation from a tunable QCL through an infrared waveguide rather than through the wastewater itself.”

The proposed nitrogen sensor is expected to have a wide range of sensitivity, from 0.1 parts per million to 250 parts per million, and could also be used to monitor phosphorus and organic contaminants, adds the firm.

Max-IR believes that the platform technology developed could also be expanded to produce similar sensors for monitoring of per- and polyfluoroalkyl substances (PFAS), as well as biological hazards such as coliform bacteria, including the well-known E. coli.