Record quarterly sales, cashflow, and backlog as Finisar cost-savings run ahead of plans. 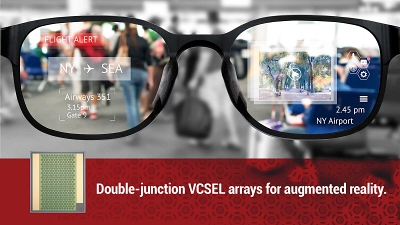 Diversified photonics company II-VI has seen its stock rise to another all-time high, after its executive team revealed record-breaking financial results for the final three months of 2020.

At $787 million, the Pittsburgh firm’s sales revenues were higher than it had forecast back in November, while cost savings associated with the 2019 acquisition of Finisar helped II-VI deliver pre-tax earnings of $106 million in the December quarter.

“We continued to gain share in 3D sensing, growing our revenue over 200 per cent compared to last year, and over 140 per cent sequentially,” he said. “We increased our volume shipments into multiple end customers and applications, in front-facing as well as world-facing configurations.”

Recently, some Wall Street analysts have speculated that II-VI has taken market share away from Lumentum. Both of the photonics companies have made large investments in VCSEL production for 3D sensing applications in recent years, with initial deployments in Apple’s iPhones now proliferating across Android platforms and beyond smart phones.

Actives and passives
Discussing the latest results in a conference call with analysts, Mattera described demand for 3D sensing VCSELs as “exceptionally strong”. In the closing quarter of 2020 sales of the components accounted for 15 per cent of II-VI’s total revenues, or $118 million.

Giovanni Barbarossa, who heads up the company’s compound semiconductor division, suggested that II-IV was “well on the way” to achieving the leading share of the global market in 3D sensing VCSELs.

He added that the company was now shipping VCSEL arrays for in-cabin sensing applications in the automotive market, and engaged in a number of potential lidar opportunities.

Expanding on that lidar theme, Barbarossa explained that as well as producing active components like VCSEL arrays and edge-emitting lasers, II-VI was also the source of a whole range of passive optical components - parts like polygon scanners, mirrors, lenses, filters, and gratings.

“Unlike our pure-play laser competitors, we have an entire vertically integrated portfolio of both active and passive components made from our engineered materials that are critical for next-generation lidar designs,” he suggested.

“We believe the lidar market is still in its infancy, but with our strong customer traction and design engagements, we are poised to take a large share of this market as it develops,” added Barbarossa.

He also noted that the currently very wide variety of lidar technologies under development was typical of a market that is at an early stage, and that more time was needed to “shake out” the winning designs.

Finisar synergy
While sales and bookings have grown sharply - II-VI's current order backlog stands at a record $1.1 billion - costs are also down in some key areas of the business. For example, II-VI reported internal research and development spending of $85 million in the latest quarter, down from $108 million a year ago.

“We are well ahead of our plan to achieve our three-year, $150 million total synergy target from the Finisar acquisition,” said Mattera, adding that the target for cost savings associated with the deal was now being extended by $50 million.

With sales in the current quarter expected to end up somewhere between $760 million and $780 million, the CEO remarked that all of the company’s target markets were currently strengthening.

Asked about the possibility of further consolidation in photonics and related industries, Mattera commented: “We have a long-term aspiration to change the world and we are doing it with the benefit of innovation, and being able to identify the long-term trends in the marketplace that will take full advantage of that innovation - or be enabled by it. We're not done investing.”

• Following the latest announcement, II-VI’s stock price jumped in value by around 8 per cent, to around $95 on the Nasdaq. That is more than double the valuation seen as recently as October.

Equivalent to a market capitalization of close to $10 billion, the current price represents the company’s highest mark in more than 30 years on the public exchange.