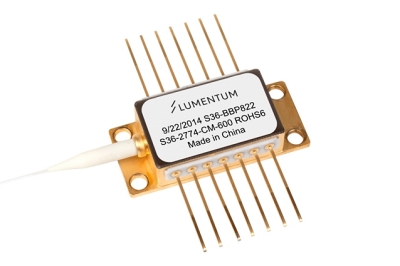 Photonics giant Lumentum has posted a solid increase in both sales revenues and income in its latest financial quarter, adding that next year should see the start of a steady ramp in demand for its components to be used in automotive lidar applications.

CEO Alan Lowe and colleagues revealed sales of $479 million for the quarter ending December 26, up around 5 per cent on the same period a year earlier.

At $98.1 million, pre-tax income for the quarter was 70 per cent higher than in the closing calendar quarter of 2019.

Lowe pointed to continued strong momentum in the communications sector as the key driver of that improvement, highlighting the significance of photonics technology in the global reaction to the Covid-19 pandemic.

Referencing the development and initial roll-out of vaccines, Lowe remarked: “While I can't put us in the same category as these life savers, I am proud that Lumentum plays an important role in the critical infrastructure that helps people safely continue their work, education, and life during these challenging times.”

Auto lidar emerging
As usual, the largest chunk of Lumentum’s sales in the latest quarter came from the communications sector, with sales of reconfigurable optical add-drop multiplexers (ROADMs), and high-speed coherent optical components based on indium phosphide said to be among the key business drivers.

In the consumer sector, Lowe said that new applications such as computational photography and augmented and virtual reality (AR/VR) had the potential to drive world-facing 3D sensing capabilities - which rely on photonic components such as VCSELs from Lumentum and others - more broadly, especially in Android smart phones.

While there are concerns in some quarters that Lumentum may be losing market share in this area, it now looks like a similar opportunity will emerge in the automotive industry next year. “Lidar and 3D sensing for automobiles and delivery vehicles add significantly to our long-term market opportunities,” Lowe told an investor conference call.

The CEO noted that Lumentum had completed a number of design wins in the latest quarter, some of which envisaged start-up production at some point in 2022.

Chris Coldren, Lumentum’s senior VP of strategy and corporate development, added: “Our partnerships span from traditional auto manufacturers to autonomous vehicle manufacturers to folks that are building lidar modules [and] then supplying into those same supply chains.

“In the nearer term, perhaps the [autonomous] delivery vehicle is probably where [we] will see the initial sales go.”

Coherent combination
Turning to the company’s pending $5.77 billion acquisition of laser manufacturer Coherent, Lowe said that one of the main motivations behind the deal was the growing significance of the role that photonics is expected to play across numerous industry value chains in the future.

“This includes the increasing role that lasers and photonics play in the manufacturing of the growing number of advanced semiconductors, displays, and microelectronics that enable the digital transformation [partly in response to the pandemic],” added the CEO.

“Another example is the increasing role of lasers and photonics in the manufacturing and supply chains of electric vehicles and energy storage solutions. This is an important and significant opportunity as the world transitions to these sustainable technologies to combat climate change.”

Other key areas include aerospace and defense - where Coherent’s Nufern subsidiary has played a major role in the development of laser weapons under US Department of Defense contracts - and instrumentation for applications in life sciences.

“In addition to the top-line growth opportunities I have outlined, we believe there are significant efficiencies and optimizations to be gained in the combination with Coherent,” said Lowe, hinting at what are likely to be future site consolidations after the merger is completed.

• Following the latest update, Lumentum’s stock price fell by around 8 per cent on the Nasdaq, possibly reflecting fears that the company could be losing market share in the 3D sensing market, to rivals such as II-VI.

Now trading at around $90, similar to valuations seen a year ago, the company currently commands a market capitalization of around $6.7 billion.