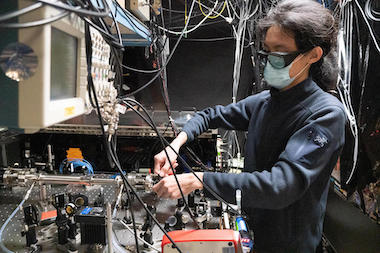 Breath analysis is a potentially valuable route to health monitoring and diagnosis, using optical techniques to detect molecules of interest in exhaled air.

The principle has already been applied to a variety of different medical scenarios, including the analysis of body fat metabolism, diagnosis of Heliobacter infection, and the detection of cancer markers.

A project at JILA, the research institute operated jointly by NIST and the University of Colorado Boulder, has now developed a new platform for breath analysis, said to achieve ultra-high detection sensitivity at the parts-per-trillion level. Published in PNAS, the research describes a way to allow several molecules in breath to be measured simultaneously.

This could lead to breath analysis becoming more accessible and widely adopted, something which is currently held back by two main hurdles according to JILA: the experimental challenges of dealing with extremely small amounts of gas-phase molecules, and the relative scarcity of large-scale clinical studies.

One current motivation for tackling these challenges is the potential use of the technique to track infectious diseases, both bacterial and viral. According to JILA, three recent studies have demonstrated the use of breath analysis to discriminate between SARS-CoV-2 infected patients and patients affected by other conditions.

The project designed its new platform to exploit recent advances in optical coatings, photodetector technologies, and particularly frequency combs, sources in which the output of a coherent laser consists of a series of discrete, equally spaced and narrow frequency modes akin to comb teeth.

When employed in cavity-enhanced direct frequency comb spectroscopy (CE-DFCS), an architecture in which a sample gas is analyzed within a cavity bounded by high reflectivity mirrors to increase the interaction between light and sample, frequency combs can allow a necessary combination of broad spectral range and fine resolution for breath analysis.

Detection of multiple biomarkers at the same time

Along with a purpose-built photodetector, the project adapted its CE-DFCS platform to include a shift in the light spectrum analyzed from the near-infrared to the mid-infrared band, where more molecules absorb light.

In initial trials, the project's platform detected and monitored four biomarkers in the breath of a volunteer simultaneously: methanol, methane, water, and a form of heavy water or HDO. These are indicators of health conditions such as, in the case of methane, intestinal problems.

"It is feasible to use the same apparatus to detect six more chemicals: formaldehyde, ethane, carbonyl sulfide, ethylene, carbon disulfide and ammonia," commented the JILA team. "In addition, extending the comb lasers further into the infrared should greatly expand the detection capability and enable the identification of many hundreds of trace breath chemicals."

The ability to detect multiple species at the same time is a key advantage, according to JILA's Jun Ye, who noted that JILA was the only institution that has published research on comb breathalysers. Most optical breath tests approved by the US FDA detect only one chemical, while the most widely used analytical technique in breath research overall employs gas chromatography and mass spectrometry, which can detect hundreds of molecules but requires tens of minutes to do so.

Future work will see the team engineer a more compact version of its optical breathalyzer. In the current platform the tube is only 55 centimeters long, but the laser comb is custom-made and described as somewhat bulky.

"We are really quite optimistic and committed to pushing this technology to real medical applications," said Ye.