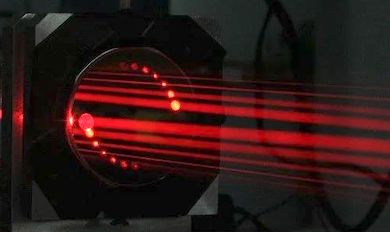 Detecting common diseases and illnesses by identifying telltale chemical compounds in exhaled breath has been a goal of biophotonics developers for several years.

In the case of cancer, specific volatile organic compounds produced as byproducts of the cellular changes underway in malignant tumors can in theory be found in bodily fluids such as urine and sweat, but their presence in breath is thought to offer the easiest route to detecting the fingerprints of the disease.

The hurdles to date have included detecting specific compounds at low concentration levels in potentially complex chemical mixtures, and doing so with spectroscopic platforms that can ultimately be developed into real-world clinical devices.

A project at the University of Warsaw has now developed a proof-of-concept spectroscopy platform designed to detect formaldehyde, known to be a potential chemical marker for lung and breast cancer, in a patient's exhaled breath at levels of 1 part per million or less. The study was published in Biomedical Optics Express.

"Measuring biomarkers in exhaled breath is noninvasive, painless and fast and could be used to screen for cancer even at very early disease stages, which is crucial for successful treatment," said Mateusz Winkowski of the University of Warsaw. "The optical method we developed could make this type of measurement more practical and inexpensive."

One key element of the Warsaw design is the use of multipass spectroscopy, in which sensitivity is enhanced by lengthening the light path in the experimental cell containing the gas sample being analyzed.

According to the project's published paper, the experimental architecture involved an analysis cell ended with two concave mirrors, 65 centimeters apart, designed to reflect the 3596 to 3598 nanometer laser light back and forth so that the light path is extended to 17.5 meters.

The team's other essential breakthrough was designed to tackle the problem of signal noise, an inherent difficulty in multipass spectroscopy where the light beams can be spread by scattering on mirror surface imperfections or by diffraction inside the cell. Such fringe interference between the multiple laser beams will decrease sensitivity and inhibit detection of the biomarker, according to the Warsaw team.

The solution was to develop an optical fringe quenching technique, potentially valuable not just for this specific clinical application but as a general enhancement for multipass detection of formaldehyde, a chemical of interest for its effects on human health in a number of domestic and industrial situations.

Cancer screening in the consulting room

"Our optical fringe quenching technique can be used to improve any optical system that uses a multipass cell," said Winkowski. "It could also be useful for measuring formaldehyde gas emitted from household materials or industrial sources to better understand its effects on human health."

The Warsaw interference-quenching technique involved modulating the laser's emission over a range of wavelengths by applying a sine signal of frequency 10 kHz, and then averaging the light emitted from the sample over those wavelengths. Adjustments to the sample pressure were also made in order to reduce interference from other chemicals found in breath samples.

In trials on model gas mixtures, the modulation technique combined with a sample pressure of 0.01 atm proved to be the most advantageous combination for formaldehyde detection, exhibiting the best immunity to interference from other chemical species such as water vapour, carbon dioxide and methane.

The device was ultimately able to achieve a formaldehyde detection limit of 6.6 parts per billion, "which is more than sufficient to detect the morbid level of this biomarker in breath," according to the project's paper.

Future work will involve extending the same approach to other chemical species, in particular ethane, thought to be another candidate biomarker in breath for cancer.

"Our dream is to one day build a table-top device that would be inexpensive and could be used for cancer screening in any medical consulting room," said Winkowski. "During a basic medical examination, the patient could blow into the device, and within a minute the doctor would know if the patient might need additional conventional examinations."