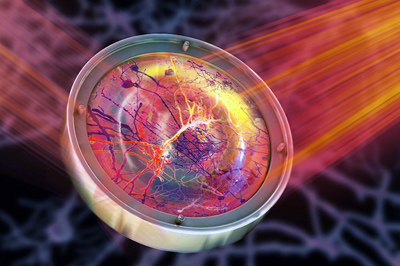 A pioneering optical technique developed by the Prevedel Group at EMBL (the European Molecular Biology Laboratory, based in Heidelberg, Germany) allows neuroscientists to observe live neurons deep inside the brain – or any other cell hidden within an opaque tissue.

The technique is based on two state-of-the-art microscopy methods, three-photon microscopy and adaptive optics. The work is described in Nature Methods.

Hitherto it has been challenging for neuroscientists to observe brain cells known as astrocytes that generate “calcium waves” in deep layers of the cortex, or to visualize any other neural cells in the hippocampus, a region deep in the brain that is responsible for spatial memory and navigation.

The phenomenon takes place regularly in the brains of all live mammals. By developing the new technique, Lina Streich from the Prevedel Group and her collaborators can capture the fine details of these versatile cells at unprecedented high resolution. The international team included researchers from Germany, Austria, Argentina, China, France, the USA, India, and Jordan.

In the neurosciences, brain tissues are observed mostly in small model organisms or in ex vivo samples that need to be sliced up to be observed – both of which represent non-physiological conditions.

Normal brain cell activity takes place only in live animals, but the “mouse brain is a highly scattering tissue,” said Robert Prevedel. “In these brains, light cannot be focused very easily, because it interacts with the cellular components. This limits how deep you can generate a crisp image, and it makes it very difficult to focus on small structures deep inside the brain with traditional techniques.”

Thanks to Streich, a former PhD student in the lab who worked for more than four years to overcome this problem, scientists can now peer further into tissues.

“With traditional fluorescence brain microscopy techniques, two photons are absorbed by the fluorescence molecule each time, and you can make sure that the excitement caused by the radiation is confined to a small volume,” said Prevedel.

“But the further the photons travel, the more likely they are lost due to scattering.” One way to overcome this is to increase the wavelength of the exciting photons towards the infrared, which ensures enough radiation energy to be absorbed by the fluorophore.

In addition, using three photons instead of two allows to obtain crisper images deep inside the brain. But another challenge remains: making sure that the photons are focused, so that the whole image is not blurry.

This is where adaptive optics – the second technique used by Streich and her team – comes into play. In Prevedel’s lab, the distortion is caused by the scattering inhomogeneous tissue, but the adaptive optics principle and the technology, as used in astronomy, are very similar here.

“We also use an actively controlled deformable mirror, which is capable of optimizing the wave fronts to allow the light to converge and focus even deep inside the brain,” explained Prevedel.

“We developed a custom approach to make it fast enough to use on live cells in the brain,” added Streich. To reduce the invasiveness of the technique, the team also minimised the number of measurements needed to achieve high-quality images.

“This is the first time these techniques have been combined,” said Streich, “and thanks to them, we were able to show the deepest in vivo images of live neurons at high resolution.”

The scientists, who worked in collaboration with colleagues from EMBL Rome and the University of Heidelberg, even visualised the dendrites and axons that connect the neurons in the hippocampus, while leaving the brain completely intact.

“This is a leap towards developing more advanced non-invasive techniques to study live tissues,” Streich said. Although the technique was developed for use on a mouse brain, it is easily applicable to any opaque tissue.

“Besides the obvious advantage of being able to study biological tissues without the need to sacrifice the animals or to remove overlaying tissue, this new technique opens the way to study an animal longitudinally, that is, from the onset of a disease to the end. This will give scientists a powerful instrument to better understand how diseases develop in tissues and organs,” she said.