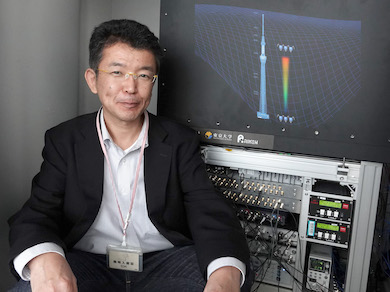 The 2022 Breakthrough Prize in Fundamental Physics, one of the set of annual prizes bestowed by the Breakthrough Foundation and backed by Sergey Brin and Mark Zuckerberg among others, has been awarded jointly to Hidetoshi Katori and Jun Ye.

The award and the $3 million between the pair that goes along with it recognizes the two laureates' independent work on optical lattice clocks, time-keeping devices with potential applications in both fundamental research and applications such as quantum computing.

Ye is professor of physics at CU Boulder and fellow at NIST, and is based at the JILA research institute operated jointly by the two organizations. Katori leads the University of Tokyo Quantum Metrology Lab.

"JILA is very excited and proud of Jun Ye's achievements," said Andreas Becker, chair of JILA. "We believe that the Breakthrough Prize in Physics is a well-deserved honor for Jun. His accomplishments have paved the way to many new directions in quantum physics, including the development and applications of optical clocks."

In its citation the Breakthrough Prize said that "Hidetoshi Katori and Jun Ye, working independently, have improved the precision of time measurement by 3 orders of magnitude. Their techniques - tabletop in scale - for using lasers to trap, cool and probe atoms, produce quantum clocks so accurate that they would lose less than a second if operated for 15 billion years."

The principle behind optical lattice clocks involves using lasers to trap specific atoms in one-, two- or three-dimensional arrays, with the precise distances between the trapped atoms controlled through variations in laser wavelength or angle.

Katori's initial work at the University of Tokyo in the early 2000s studied how to use the frequency of electron energy level transitions in strontium ions trapped in such a lattice as a precise time-keeping parameter.

At around the same time a group at Caltech of which Jun Ye was a postgrad member developed the idea of a "magic wavelength" for optical trapping, a laser wavelength at which the trapping action did not itself perturb the frequency of transitions.

Since then research has focused on applying these basic principles to different ions and assessing the limits of performance that such clocks can achieve, potentially in application-friendly small-scale platforms.

Speaking at SPIE Photonics West in 2018, Hidetoshi Katori said that his team had developed an optical lattice clock operating at an uncertainly level of 10-18, sufficient to detect the difference in tick rates of clocks separated vertically by only one centimeter, and that such research is set to be among the critical innovations of the next few years.