High-stability “super-radiant” source based on rubidium atoms could have applications in atomic clocks and navigation systems. 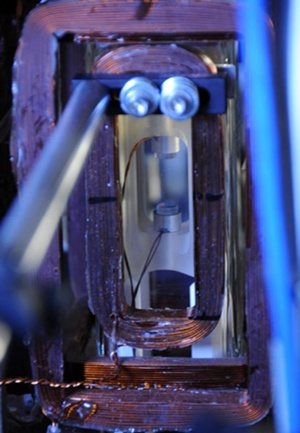 An entirely new type of laser being developed by a team of physicists at the National Institute of Standards and Technology (NIST) affiliate laboratory JILA could lead to atomic clocks with an unprecedented time and frequency precision.

According to James Thompson and colleagues at the Boulder, Colorado, lab, basing the laser on rubidium atoms that are synchronized in the manner of a phased array makes the beam’s frequency thousands of times more stable than that of a conventional laser.

Thompson’s prototype design, described this week in the journal Nature, confirms theoretical predictions made by fellow NIST/JILA scientists Jun Ye and Murray Holland several years ago. It could lead to applications in communications, astronomy and navigation systems – all of which rely on the very high optical frequency stability that makes atomic clocks so precise.

Conventional lasers already have very good frequency stability, but slight variations do occur because of the natural vibration of the cavity mirrors at ambient temperatures. According to Thompson, that is not an issue in the new "super-radiant" laser because the photons spend only a very short time between the two cavity mirrors, rather than being bounced back and forth and amplified, as is normally the case.

In the new system, rubidium atoms are lined up to create a row of identical antennae that form the laser's gain medium and emit red light spontaneously. Thompson told optics.org: “There are no cryogenics involved, but the gain medium is very, very cold - roughly 20 microKelvin. The atoms are cooled using milliwatt-powered semiconductor lasers - fast and simple.”

Different kind of stimulated emission
Because the laser works without the typical cascading amplification of light seen in a normal laser, the crucial stimulated emission element of the design - the very definition of a laser - is produced in a different way.

Thompson says that the rubidium atoms would normally emit only about one photon per second, but that by synchronizing them to act in unison this rate increases by a factor of 10,000, generating the “super-radiant” effect and meeting the stimulated emission definition.

Although measurements have shown that the new laser is also 10,000 times less sensitive to mirror vibration than a normal laser, the down-side of the mechanism, as things stand, is that it can only generate a very low optical power.

“This super-radiant laser is really, really dim,” Thompson says. “About a million times weaker than a laser pointer.” But the emission is much brighter than would be the case if the atoms that form the gain medium were uncoordinated, and the physicist believes that it will be possible to generate higher powers in the future.

Another way to generate more power is to use a photodiode and a simple, low-frequency electronic servo loop to phase-lock the weak super-radiant output to a much more powerful laser. “Phase-locking is bread and butter technology, and has been demonstrated at thousands of times lower power levels than that generated by our, or a future super-radiant laser,” Thompson added.

Better atoms
It also turns out that rubidium is not the ideal atom to use in a super-radiant laser, and that other atoms, such as strontium and ytterbium, would actually provide much greater stability. Using rubidium has demonstrated the basic physics of a super-radiant laser in prototype form, says Thompson, but those other atoms have much longer-lived excited states and can also be held more gently – as has been demonstrated in atomic lattice clocks.

“There are no known obstacles to recreating this effect using other atoms such as strontium or ytterbium atoms, among others,” Thompson said. “Could there be unforeseen problems? Definitely. But so far, so good.”

For Thompson and the rest of the NIST/JILA team, the next steps in the research – funded in part by the US Army Research Office and the Defense Advanced Research Projects Agency (DARPA) – will include working out how stable the super-radiant laser is when up against various forms of noise, as well as developing versions with different atoms.

“The likely timescale for making such a laser work is one to three years,” he said. “It is a really novel approach, with lots of exciting questions to ask and to be answered.”

• The NIST/JJILA team’s work is described in the April 5, 2012 issue of the journal Nature. JILA is a joint institute of NIST and the University of Colorado Boulder, and was previously known as the “Joint Institute for Laboratory Astrophysics”.