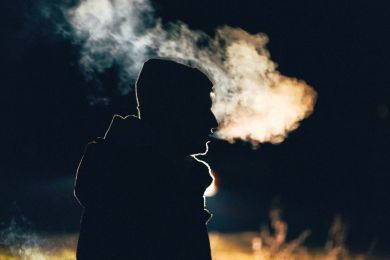 Breath taking: and testing for acetone

Analysis of exhaled breath can potentially reveal useful information about a number of different health conditions, from cancer to bacterial infection, by detecting the trace presence of different molecules.

Optical spectroscopy has provided a versatile range of instruments for spotting the volatile organic compounds of interest, although the platforms have to date tended to be overly large and complicated for use in clinical or domestic settings.

A project at Japan's Tohoku University has now developed a possible solution for one particular application, and designed a UV spectroscopy platform for the detection of acetone in breath. The work was published in Sensors.

The first instruments to measure breath acetone were designed around Nd:YAG laser sources, according to the Tohoku team, and aimed to exploit acetone's absorption in the ultraviolet at 266 nanometers; but they were large and bulky platforms.

More compact multipath gas cells and LED sources have allowed for smaller instruments, although the sensitivity has continued to be constrained by the relatively small absorption coefficient of acetone in the UV wavelength ranges being employed.

The new Tohoku project aimed instead to employ a wavelength usually considered to be in the vacuum-UV range at approximately 195 nanometers where the absorption by acetone is greater. But the goal was to design a platform that did not employ any vacuum components, reducing the complexity of the instrument.

Using the 195 nm acetone wavelength also offered the ability to detect isoprene, a hydrocarbon thought to be connected to cholesterol levels, at the same time using the same platform.

"As far as we know, this is the first successful detection of the absorption peak of breath acetone in the vacuum-UV," commented the project in its published paper. "This enables the simultaneous detection of acetone and isoprene in breath."

Metabolism of fat in the body

The new platform is designed around the use of a deuterium lamp source and a commercial hollow-core optical fiber, effectively acting as both as a long-path and an extremely small-volume gas cell. An aluminium coating on the inner surface of the hollow core was a key factor in the platform's consistent transmission properties over the time-span of the experiment, according to the project.

During use, a regression analysis method using the measured absorption spectra of oxygen and water as well as that of acetone was used to quantify the concentration of acetone in samples of breath from five patients. The results indicated that healthy human breath had an acetone concentration of around 0.8 ppm, with a deviation of 0.074 ppm and a precision of 0.026 ppm.

Acetone levels in the breath are known to have a high correlation with the amounts of acetone in the blood, which is in turn understood to be a biomarker for diabetes, so a simple and effective sensor device could have an immediate impact on one common health problem.

"The present research may lead to non-invasive diagnosis methods for diabetes, since diabetic patients have high concentrations of acetone gas in their breath," commented Yuji Matsuura from Tohoku University's Graduate School of Biomedical Engineering, who led the research group.

Acetone in breath is also thought to correlate with the rate of fat loss in the human body, since it is a by-product of the lipolysis process in which fats break down in tissue stores. An initial study on an exercising volunteer indicated that the device was indeed able to detect increased acetone levels after the conclusion of the training, potentially allowing studies of human metabolism to be made by similar acetone analysis.