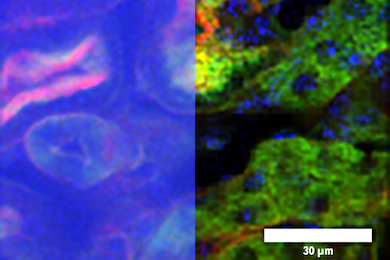 Two-photon excitation microscopy, in which simultaneous excitation by two infra-red photons can cause a fluorophore target to emit visible fluorescent light, has played a part in major breakthroughs in neural imaging.

These advances were recognized when the €1 million Brain Prize was awarded in 2015 to researchers who had pioneered bioimaging applications of the technique.

Recent adaptations of the basic principle have included ways to use adaptive optics to enhance two-photon resolution, as a potential route to endoscopy platforms capable of carrying out deep-brain imaging.

A project at MIT and Harvard University has now tackled another recognized hurdle, the limited throughput of a nonlinear two-photon method compared to the established wide-field modalities commonly applied to thin tissue specimens.

The breakthrough, reported in Science Advances, has been christened De-scattering with Excitation Patterning, or DEEP, and involves patterned nonlinear excitation followed by computational imaging–assisted wide-field detection.

"By modifying the laser beam coming into the tissue, we showed that we can go deeper and we can do finer imaging than the previous techniques," said Murat Yildirim of MIT.

The project's goal was to allow imaging of a relatively large tissue sample all at once, while still maintaining the high resolution of a point-by-point scanning operation. Its solution involved patterning the excitation light by modifying its amplitude, so that each fluorescing pixel is turned off or on at different times.

"Multiphoton temporal focusing allows high-resolution excitation patterns to be projected deep inside a specimen at multiple scattering lengths, due to the use of long wavelength light," noted the project in its published paper.

"Computational reconstruction allows high-resolution structural features to be reconstructed from tens to hundreds of DEEP images, instead of millions of point-scanning measurements."

With each pixel effectively being turned on or off by the modulated light, space can be created around each pixel, allowing a better view of what is happening at each individual location. A computer algorithm can then reconstruct a picture of the larger imaging area.

"We control the shape of the light and we get the response from the tissue," said Yildirim. "From these responses, we try to resolve what kind of scattering the tissue has. As we do the reconstructions we can get a lot of information that you cannot see in the raw images."

In trials, the project found that DEEP allowed it to achieve an imaging depth of 200 microns in slices of ex vivo mouse muscle and kidney tissue, and about 300 microns into the in vivo brains of mice.

That represents a doubling of the image depths achieved without a patterned excitation and computational reconstruction, according to MIT, and DEEP can also generate images about 100 to 1,000 times faster than conventional two-photon microscopy.

More rapid high-resolution images of neurons in mouse brains could be particularly valuable for studies of the relationship between neurodegenerative diseases such as Alzheimer's and blood flow, while other future work could involve applying DEEP to measurements of neuronal activity, using fluorescent calcium probes that light up when neurons are excited.

In addition to brain imaging, it may be possible to use DEEP to image the blood vessels in malignancies as a way to assess the margins of a tumor, always a critical parameter in cancer surgery.