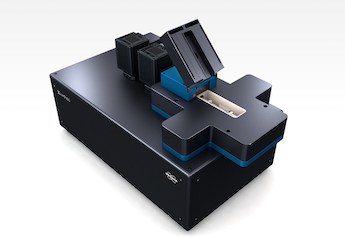 Bruker, the Massachusetts-based manufacturer of scientific instruments including spectroscopy and microscopy platforms, has announced the launch of a new addition to its Luxendo light-sheet microscopy range.

The Luxendo TruLive3D has been optimized for fast 3D multi-sample imaging of delicate live specimens in their native 3D environment, according to the company. It was unveiled at the 2019 joint meeting of the American Society for Cell Biology and European Molecular Biology Organization in Washington DC.

Light-sheet fluorescence microscopy (LSFM) is the technique in which a thin slice of a sample, usually hundreds of nanometers or a few microns in thickness, is illuminated by a laser source perpendicularly to the direction of observation. This offers a route to improved signal to noise performance and lower phototoxicity than some fluorescence-based microscopy techniques.

Commercial single-plane illumination microscopy platforms can involve illumination of a sample from multiple directions in the same plane, and TruLive3D employs dual-sided illumination with single-lens detection from below the target. The thickness of the light-sheets can be varied between two and six microns, allowing a resolution of 255 nanometers and enabling sub-cellular structures in living samples to be imaged.

One immediate application for TruLive3D could be cancer studies, where light-sheet techniques can allow the rapid imaging of tissues without phototoxicity effects damaging the cells under observation.

"Our primary breast cancer mouse model allows us to specifically induce and control cancer initiation and progression in 3D organoids," said Martin Jechlinger of the European Molecular Biology Laboratory (EMBL) in Heidelberg, Germany, the first researcher to test the TruLive3D imager. "We have been using light-sheet imaging successfully in the past and the new Luxendo system allows us to scale our experiments to hundreds of organoids per imaging session and marks a quantum leap for our research."

Luxendo was formed as a spin-out from EMBL in 2015 to specialize in light-sheet microscopy, and was then acquired by Bruker in May 2017 for an undisclosed sum as part of sequence of acquisitions intended to update Bruker's microscopy portfolio with innovative optical techniques for live-cell imaging and super-resolution microscopy.