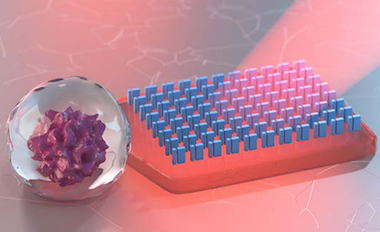 As well as their reflection and refraction properties, such materials can also change the linear and angular momentum associated with a light beam, through their effects on the phase of the light, but this behavior has to date been less studied.

A project led by Sweden's Chalmers University of Technology has now put this characteristic to use, demonstrating how the forces created by phase manipulation at a metasurface can create optomechanical effects and power tiny optical metavehicles.

Published in Nature Nanotechnology, the work could indicate a path to the creation of a wide variety of metavehicles with specialized functional behaviours.

The metavehicles manufactured by the project were 10x12x1-micron in size, consisting of a high-index metasurface lattice of polycrystalline silicon metaatoms on a low-index silicon dioxide host material. They were designed to operate in water, using 1064 nanometer plane-wave illumination.

As described in the project's paper, creating a motive force from an illuminated metasurface required two things. First the metasurface needed to bend light towards a specific deflection angle, to induce a reaction force in a particular direction.

The metasurface also had to alter the angular momentum of light in such a way that a directed reaction torque was generated, achieved through the particular architecture of the nanostructures on the surface. The Chalmers team developed this approach into a means to effectively steer the metavehicle through control of the polarization of light falling on the metasurface, rather than the direction of illumination.

Adjusting both the intensity and polarization of the light allowed researchers to control a vehicle's movement and speed with a high level of precision, according to Chalmers. The metavehicles could be navigated in different directions and complex patterns, such as figures of eight.

"The metavehicles were stable, and their navigation was highly predictable and controllable," commented co-author Daniel Andrén. "With advanced automated feedback systems, more sophisticated control of the intensity and polarization of the source light, even more complex navigation would be possible."

The researchers also used the metavehicles as transporters, to push small particles around the experiment's tank. In trials, objects including a microscopic polystyrene bead and a yeast particle were transported through the water in this way, and a dust particle 15 times the size of the metavehicle itself was also successfully pushed.

Since an abundance of different optical metasurfaces can now be manufactured, the project believes that a variety of motions and functional behaviors could equally be generated in tiny vehicles using developments of this principle. This could include using spatially multiplexed metasurfaces to build metavehicles capable of altering their functionalities depending on illumination wavelength, or metavehicles able to act as molecular sensors.

"In the exploration of optical forces there are many interesting effects that are not yet fully understood, and it is not applications that drive this type of research but exploration of the different possibilities," noted Mikael Käll of Chalmers. "The fact that we showed how the metavehicles can be used as transporters is the most initially promising potential application, for example to move particles through cell solutions."