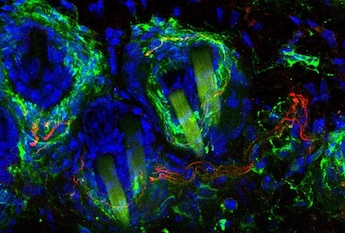 Help for people suffering from mechanical allodynia, a chronic condition whereby soft touches on the skin or other innocuous stimuli cause considerable pain, could be on the way thanks to a project at EMBL Rome, part of the European Molecular Biology Laboratory.

In tests on mice, the project identified the key role of peripheral sensory neurons expressing a particular a protein called TrkB, and deduced that ablation of TrkB-positive neurons would help to reverse mechanical allodynia.

The team has developed a phototherapy procedure in which molecule-guided laser ablation was targeted at the specific neurons of interest, to achieve long-term retraction of the neurons from the surface of the skin. The work was published in Nature Communications.

"The nice thing about our technique is that we can specifically target the small subgroup of neurons causing neuropathic pain," commented Paul Heppenstall of EMBL Rome. "“It’s like eating a strong curry, which burns the nerve endings in your mouth and desensitizes them for some time."

A key step in the breakthrough was the synthesis of a light-sensitive version of BDNF, a protein known to be a ligand for the TrkB neurons of interest. The researchers conjugated a BDNF protein with a commercial infrared photosensitizer dye already used for protein studies, and injected the material into the affected skin area of mice experiencing neuropathic pain in the limbs.

When illuminated with near-infrared light of 680 nanometers, the targeted nerve cells retract from the skin’s surface. After regular phototherapy over three consecutive days, behavioural testing of the mice indicated a reduction in neuropathic pain.

Towards human trials
In its published paper, the team describe this approach as analogous to clinically-approved capsaicin patches, in which a high concentration of capsaicin is applied to the skin and leads to retraction of sensory neurons called nociceptor fibers. In the EMBL study, however, the neurons responsible for mechanical allodynia are targeted directly, allowing for local, on-demand treatment of pain through application of light.

This method also contrasts with previous attempts to develop drugs for treating neuropathic pain, which have mostly focused on targeting single molecules. If, as the team now believes, the sensation is not caused by one single molecule but by many, then successfully blocking one or two will not lead to pain relief. An illumination method should avoid this problem altogether.

The team also carried out some initial investigations into whether the same approach would work in human skin tissue, and found that the overall makeup of the tissue and the specifics of the neurons of interest appear to be similar. This could indicate that the method might ultimately be effective in managing neuropathic pain in humans.

"In the end, our aim is to solve the problem of pain in both humans and animals," says Heppenstall. "Of course, a lot of work needs to be done before we can do a similar study in people with neuropathic pain. That's why we’re now actively looking for partners and are open for new collaborations to develop this method further, with the hope of one day using it in the clinic."