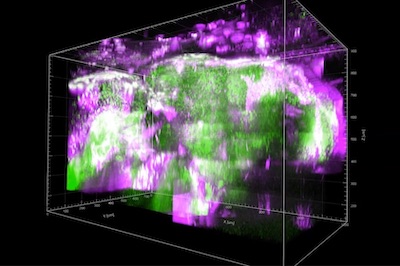 A technique for imaging the brain of a zebrafish at all stages of its development could ultimately lead to improved studies of human brain disorders.

Developed by Cornell Neurotech, a joint initiative between Cornell University's colleges of Engineering and Arts & Sciences, the new technique employs three-photon (3P) imaging, in which the action of three photons moves a fluorophore to an excited electronic state. The findings were published in Nature Methods.

Zebrafish are translucent when young, making them good models for live imaging of brain development; but they become opaque with age, which has hindered researchers trying to see into a live adult brain.

Two-photon imaging has been used to visualizing the functional organization of neural circuits in zebrafish brains in the young transparent animal, while three-photon imaging is known to be one potential way of imaging deeper within scattering tissue than two-photon operations. So the Cornell project applied 3P imaging to the zebrafish problem.

The breakthrough involved the development of a microscopy tool to use with adult zebrafish engineered with calcium sensors that light up to reveal when neurons are activated, and exploited some of the inherent similarities underlying all vertebrate animals.

"All vertebrate brains are, to a first approximation, the same, with nearly all brain regions present in nearly every vertebrate," said Joseph Fetcho of Cornell Neurotech. "This is not surprising because they all, even the simplest ones, have to do the same things to survive and reproduce."

The zebrafish used in the project were engineered so that a fluorophore protein became bound to the calcium that characterizes activated nerve cells. Until now, the problem has been that delivering standard 480-nanometer photons through the top of such an animal's head has also excited other fluorescent proteins in the beam's path, blurring the image.

Cornell Neurotech tackled this by delivering 1400-nanometer photons to a focal point in the brain. Although each individual photon has a wavelength that is too long to excite intermediary proteins, the nature of three-photon fluorescence means that three photons together will carry enough energy to excite the intended fluorescent protein when light is concentrated at the focal point.

The laser then scans repeatedly along a line in the brain, building up a two-dimensional cross section of a brain region by repeatedly imaging parallel lines. Continuing this process at different depths allowed the researchers to create a three-dimensional image of brain structures.

"Three-photon imaging through the head of intact adult zebrafish allows structural and functional imaging at cellular resolution throughout the telencephalon and deep into the cerebellum and optic tectum," recorded the team in its published paper. "With 3P imaging, considerable portions of the brain become non-invasively accessible, from embryo to sexually mature adult in a vertebrate model."

Researchers may now use fish that are engineered to develop a version of autism and other disorders, and watch how the disease progresses as the fish ages. These fish models could also be used to test potential treatments to see if they improve function, and how brain structure and function change if a condition improves.

"This is a step toward cures for some of the devastating brain disorders faced by humans," said Fetcho.