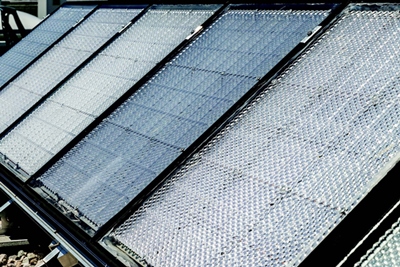 The European Union has awarded €10.6 million in Horizon 2020 funding to scale up the production of concentrating solar modules developed by the Swiss startup company Insolight.

Coordinated by the Centre Suisse d’Electronique et de Microtechnique (CSEM), the four-year “HIPERION” project features 16 participants and will aim to demonstrate how solar panel makers can adapt their production lines to boost typical conversion efficiencies from 18-20 per cent to around 30 per cent.

Until around a decade ago the approach was considered highly suited to generating solar electricity in sunny locations.

However, the additional cost of dual-axis tracker systems needed to keep sunlight focused precisely on small-area cells as the sun’s position changes during the day, coupled with a dramatic fall in the price of silicon solar panels, meant that by the mid-2010s CPV had fallen out of favor, with the nascent industry judged by the US National Renewable Energy Laboratory to be "in a severe crisis".

According to CSEM the key difference with the Insolight modules is that they still generate plenty of power under cloudy skies - something that earlier CPV systems were unable to achieve.

Instead of using a standalone CPV design, the company’s system uses planar optical micro-trackers to concentrate sunlight onto multi-junction solar cells that are mounted on top of a conventional silicon back plane.

Insolight explains that a grid of hexagonal lenses are embedded within the panel’s protective glass, to concentrate light by a factor of several hundred. “Under this optical layer, direct sunlight is focused on an array of high-performance space-grade solar cells,” it adds.

To follow the motion of the sun, instead of using trackers the cell array is shifted horizontally by a few millimeters throughout the day. Encased in a slim module, the system looks similar to standard solar panels and is able to protect mechanical parts.

Production line integration
The company says that following extensive outdoor trials and pilot installations, the technology can be installed in either standard rooftop or ground-mounted rack configurations, or as an overlay on top of conventional solar panels.

Insolight CEO and co-founder Laurent Coulot said: “In addition to developing a pilot assembly line [during HIPERION], we will also further demonstrate the performance and reliability of our innovation through qualification tests and several commercial pilot sites across Europe.”

“Our consortium has the expertise needed to bring this promising technology one step closer to mass production by further testing its economic potential and developing an assembly process that can be integrated into existing PV module production lines.

“Consortium members include several solar project developers that will assess the technology from the perspective of the rooftop and utility market segments.”

Under HIPERION, the 16-strong consortium will aim to combine Insolight’s technology with new back-end manufacturing approaches to give European PV manufacturers an edge over the global competition.

Coulot says that although the approach involves a few extra assembly steps at the end of existing production lines, the subsequent boost in energy yield will deliver a greater return on investment compared with regular silicon solar modules.

“Our technology can reduce solar electricity costs by up to 30 per cent on rooftops in sunny countries,” claims the CEO, who expects to the first Insolight products to reach the market by 2022.