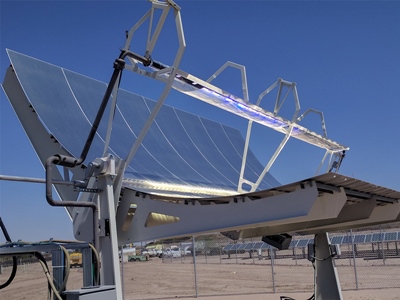 by Ford Burkhart in Tucson
Rising up from the desert near the Santa Cruz River west of Tucson are the giant mirrors of a prototype solar energy system.

The hybrid design's most distinctive feature might be a giant parabolic reflector some 25 feet long, but the critical component is a dichroic mirror that reflects some solar photons toward a high-efficiency photovoltaic device, tracking the sun to maximize the daily energy generation.

The secondary dichroic also directs the remaining sunlight towards a black tube to heat a high-boiling-point liquid, such as ethylene glycol (the key chemical in antifreeze), to a high temperature – effectively storing away heat for later use.

It’s not an entirely new concept, but the hybrid concentrator approach is one that Robert A. Norwood, an optics and photonics researcher in the College of Optical Sciences at the University of Arizona, thinks could have a commercial future.

Norwood says his team is in the early stages of talking with potential customers for the hybrid system, although it is not yet on the market.

Twin technologies
Concentrated photovoltaics (CPV) and solar power (CSP), the twin technologies in the hybrid approach, are not exactly “flavor of the month” in the solar sector.

Although each of the approaches has a significant technical advantage over conventional solar – the sheer efficiency of CPV, and the storage capacity of CSP – extraordinary falls in the price of silicon-based panels since 2011 have undermined both, and seen CPV in particular shunned by investors.

In the meantime, virtually every commercial exponent of CPV has gone to the wall. But in theory the potential for disruption is still there – especially in predictably sunny geographies like the Arizona desert, which are particularly well suited to concentrator systems.

That potential was still recognized by ARPA-E (the Department of Energy’s under-threat Advanced Research Projects Agency-Energy funding scheme) in 2015, when it funded Norwood’s and ten other projects under its “FOCUS” program – shorthand for Full-Spectrum Optimized Conversion and Utilization of Sunlight.

“It changes the whole game,” Norwood says of the hybrid system. “Since all of the basic components for the system are available, when coupled with our proprietary designs, the market entry of this system could be quite rapid for the right applications.”

Other research teams working on MOSAIC projects are based at Texas A&M, Caltech and MIT, along with some of the few remaining commercial CPV practitioners at Panasonic, Sharp, Semprius, and Glint Photonics.

Norwood’s team is supported by two ARPA-E grants, totaling $3.7 million, and the Arizona researcher says the MOSAIC program should enable cost-effective reduction of the area taken up by such systems by as much as 50 per cent.

Of the other teams working on new CPV technologies, Glint has demonstrated some technological developments but has broadened its focus to lighting applications, while according to a local report North Carolina-based Semprius closed its doors earlier this year.