San Diego manufacturing facility to be scaled down after planned 150MW California project fails to materialize. 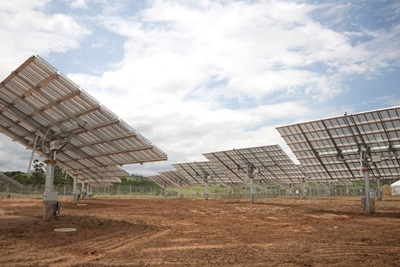 Soitec, one of the few credible exponents of concentrated photovoltaics (CPV) technology still active in a sector that has been decimated in recent years, has suffered a major blow with the cancellation of a planned 150 MW project in the US.

News that a power purchase agreement (PPA) originally signed with San Diego Gas & Electric (SDG&E) would fail to materialize sent the stock price of Paris-listed Soitec plunging, with the company losing more than half of its value on December 22.

Major roadblock
“Soitec has been informed by the new owner of the PPA contract that they are facing a major roadblock which prevents the project to materialize,” said the firm in an update to its financial guidance for next year.

Exactly why the project will not happen is not yet clear. Soitec merely said: “Certain of the administrative conditions pertaining to the transaction could not be fulfilled timely [sic].”

But the implications for the company and its San Diego workforce are huge. Soitec will not now receive the expected CPV systems order, which would have required more than 80,000 modules to deliver the largest such power plant yet constructed.

Soitec had originally built its CPV module manufacturing site in San Diego in response to demand for utility-scale plants in the local region, whose hot and reliably sunny climate is well suited to the technology.

As recently as October, the French firm had said that “one of the largest providers of solar energy services” in North America had agreed to buy the 150 MW power that the CPV plant was slated to generate.

The only clue to any potential problems was Soitec’s admission that the actual construction of the project remained subject to “certain conditions”.

Immediate scale-down in San Diego
Soitec has already racked up substantial losses on its CPV development and facility construction, and posted a half-yearly operating loss of €75 million earlier in 2014. It had expected to begin recouping some of the outlay on the San Diego facility with the consummation of the 150 MW project in California, but that plan now looks to be in tatters.

As a result, the company has declared an “immediate” scale down of the San Diego site, to an unspecified new capacity. It is now anticipating that the hefty operating loss will not be significantly reduced in the rest of its current fiscal year, while a substantial write-down of assets will also be needed.

According to local reports, Soitec had been "scrambling" to salvage contracts after SDG&E ended its relationship with the French company. Problems hitting project milestones and the shifting sands of PV economics have now put the $200 million assembly line and the jobs of its 250 workers in jeopardy, it appears.

On the plus side, Soitec has now completed all the required tests on the 44 MW CPV plant that it has just built for the South African utility company Eksom, and received full confirmation for its final commissioning.

“This major milestone evidences the technical capabilities, the reliability and performance of Soitec’s CPV technology,” said the company, adding that the development should also trigger the release of what will now be much-needed cash collection for completion of the project.

But despite that and its recent development of a record-breaking 46 per cent efficiency four-junction solar cell, the verdict of the stock market was resoundingly negative – and wiped more than half of Soitec’s value at a stroke.