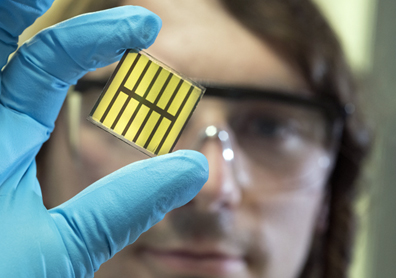 The efficiency of commercially available solar modules can only be increased to a limited extent, according to German researchers at the Karlsruhe Institute of Technology, Germany.

As they start working on the new Capitano project, which commenced in July, 2019, the team led by Professor Michael Powalla with Ulrich Paetzold say, "Significantly more potential is offered by the use of two light-active layers in tandem solar modules. This promising technology could be the future of photovoltaics."

Project partners are the Center for Solar Energy & Hydrogen Research Baden-Württemberg (ZSW) as coordinator, KIT and the company NICE Solar Energy in Schwäbisch Hall. They are combining thin-film solar modules based on perovskite semiconductors with semiconductors made of copper, indium, gallium and selenium (CIGS). The combination enables highly efficient tandem solar cells with an efficiency potential of over 30% with all the advantages of thin-film technology.

Tandem solar modules consist of two different types of solar modules stacked on top of each other, which make better use of the spectrum of sunlight than the respective single solar cell. As a result, the multiple solar modules have a higher efficiency. Significantly more than 30% are theoretically possible – with simple silicon solar cells, for example, the theoretical conversion limit is only 29.3% due to physical material properties.

There are now several variants of tandem modules available. In CIGS perovskite development, a perovskite solar cell converts the light into electricity in the visible part of the solar spectrum. The underlying CIGS solar cell absorbs the light in the near-infrared spectrum, which penetrates the perovskite solar cell. Both solar cells use thin-film technologies that can be produced on square-meter substrates. This could significantly reduce costs while at the same time achieving high efficiency, says the KIT team.

Prof. Powalla, who is also a Member of the Executive Board and Head of Photovoltaics at ZSW, said of the consortium's leading composition, "I expect great progress in the further development of this expertise, from the basics to the mass production of the project's promising technology."

Paetzold, junior research group leader at KIT, added, "We are developing the next generation of highly efficient thin-film tandem solar modules, which have an efficiency of more than 30%. Promising fields of application are, for example, highly efficient solar modules for building-integrated photovoltaic solutions."

The Capitano project is scheduled to run for three years. The German Federal Ministry for Economic Affairs and Energy is supporting it with a total of around €5.2 million, of which €2.1 million will go to KIT. The stated aim of the project is "to develop cells with stable higher efficiencies, which can be interconnected to form efficient tandem solar modules. The industrial partner NICE is to evaluate production on an industrial scale and to evaluate the costs."

The perovskite coating is to be tested with industry-relevant processes such as slot casting. Important sub-aspects here are optimized intermediate layers and adapted transparent contact layers. The results will be incorporated in the realization of series-connected tandem solar cells and modules. The environmental compatibility of the manufacturing process is also being evaluated.

KIT is tasked with developing new materials and processes as well as prototypes for the production of semitransparent perovskite solar cells and solar modules with an adapted absorption spectrum (band gap), high efficiency and high transparency.

In particular, scalable production methods such as slot casting or deposition from the gas phase in vacuum are in the foreground. In view of the complex architecture of the tandem solar cells, the scientists are developing a lighting management concept for improved luminous efficacy.

A cost comparison with single-junction CIGS solar modules is also part of the agenda. An annual production capacity of 300 megawatts is assumed; this would be a production quantity on an industrial scale.