At next week's IAA, Fraunhofer ISE will present "invisible" solar panels that can charge batteries and extend drive range by at least 10%. 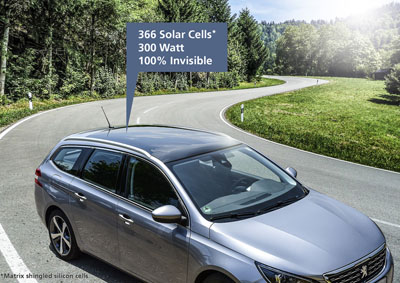 To extend the driving range of vehicles, the Fraunhofer Institute for Solar Energy Systems (ISE) has developed a solar car roof with highly efficient solar cells. Furthermore, the roof can be coated in any color, with the solar cells integrated invisibly into the preformed solar roof.

The photovoltaic cells with a nominal power of about 210 W/m2 provide sustainable electricity for a daily drive of about 10 km for an average electric car on a sunny day. Calculated over one year, the driving range can be extended by about 10 percent.

At the joint booth of the Fraunhofer-Gesellschaft at the Frankfurt Motor Show (IAA), which runs from 12th-22nd September, two solar car roofs in different colors will be displayed.

Dr. Andreas Bett, Institute Director of Fraunhofer ISE, commented, “In order to achieve a CO2-free energy supply for all sectors, we must promote the expansion of photovoltaics vigorously, beyond house roofs and open spaces. In the future, solar modules will be more widely integrated into our built environment, for example in vehicles.”

To integrate photovoltaics into a solar car roof, the researchers in Freiburg rely on shingle interconnection: the monocrystalline silicon solar cells overlap each other and are electrically connected by a conductive adhesive. This means there are no electrically inactive surfaces caused by cell gaps.

Thereby the maximum surface area can be used for power generation, simultaneously offering a homogeneous, aesthetic appearance. In addition, lower resistance losses, the avoidance of shading due to cell connectors on top of the cells and particularly high tolerance to shading ensure up to 2% higher module efficiency than with conventional solar modules. The solar cell matrix is laminated in a polymer-film laminator between the glass panes of a commercially-available, spherically-curved panorama car roof. By applying a specially manufactured mold, lamination can also be carried out in a conventional laminator.

Another feature of the new ISE solar roof is that the solar cells are completely hidden by a special colored coating and are therefore invisible. The relative efficiency loss due to the Morpho-Color® glass coating is only 7%. The effect inspired by the morpho butterfly is achieved by special surface structures that enable high color saturation with good angular stability.

“The color possibilities are almost endless,” commented Dr. Martin Heinrich, head of PV for Mobility at Fraunhofer ISE. "The functionality of the solar roof corresponds to that of a standard metal car roof. The solar cells convert incident solar radiation into electricity, which helps to reduce overheating in the car."

Due to the shingle interconnection, the module voltage is higher than with a conventional module, making it easier to transform the voltage to the battery voltage. The bonded shingle cells can also compensate well for the large thermal and mechanical loads experienced by a moving vehicle.

The integrated solar cells of the PV car roof have an output of 210 W/m2 and can supply sustainable electricity for a daily mileage of 10 km on a sunny summer day. This corresponds to an annual extension of an average mileage by 10% or an equivalent reduction in fuel consumption.

The calculation is based on the unshaded solar radiation in Freiburg im Breisgau, the consumption of an electric car of 17 kWh per 100 km and an annual mileage of 15,000 km. Solar power can also be used for loads which could otherwise limit the range of an electric vehicle (e.g. air conditioning, heating). Fraunhofer ISE said it sees "research potential in the integration of photovoltaics in additional vehicle surfaces for a further extension of the range."

To investigate the potential of vehicle roofs, Fraunhofer ISE, in cooperation with several transportation companies, has already conducted a measurement campaign (2016- 2017): siz trucks were equipped with irradiation and temperature sensors as well as GPS and their routes were recorded in Eastern USA as well as in Central and Southern Europe.

In Europe, a potential of 5000-7000 kWh of annual electricity generation on a typical truck roof were determined, which corresponds to a mileage of 5000-7000 kilometers. In the planned Citizen Science project “PV2Go”, researchers at Fraunhofer ISE, with the support of interested car owners, intend to determine the irradiation potential for cars.