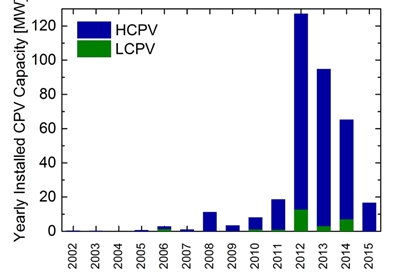 Despite continued advances in concentrator photovoltaics (CPV) technology – not least a new record-breaking mini-module that converts 43.4 per cent of solar energy into electricity – deployments in the field have plunged for a third successive year.

That’s according to a new report from two of the world’s leading authorities on the topic, the US National Renewable Energy Laboratory (NREL) and the Fraunhofer Institute for Solar Energy Systems (ISE).

In Current Status of CPV Technology they write: “Several major blows to formerly leading CPV companies have occurred very recently, shaking confidence in the industry.” That refers to moves last year by France-based Soitec and China’s Suncore to exit the market, along with the failure of Soitec to sell its CPV systems business.

“With the largest manufacturers exiting CPV in 2015, the CPV industry is undergoing a severe crisis,” state report authors Simon Philipps and Andreas Bett from ISE, and Sarah Kurtz and Kelsey Horowitz from NREL.

They estimate that the total number of CPV installations now connected to the grid reached 360 MW in 2015. But despite the wider PV market registering record deployments of around 60 GW last year, less than 20 MW of CPV was installed – a vanishingly small percentage of global demand.

Prices undercut
CPV has previously been suggested as a potentially more effective option for hot and sunny locations with predictably clear skies. In 2012, it looked like that was beginning to happen, with installations of 120 MW globally rising from only 20 MW the previous year.

However, the fast-dropping cost of conventional PV systems has since undercut the more expensive CPV option, with global CPV installations falling significantly every year since 2012. The NREL and Fraunhofer ISE researchers estimate the 2015 figure at just 17 MW.

Close to half of the cumulative CPV installations are in China, with just over 80 MW in the US. And although South Africa only has one major CPV plant – the 44 MW Soitec installation in Touwsrivier - that is enough for it to rank third in the report’s list of countries with the most grid-connected CPV power.

The one hope for CPV proponents is that cell and module efficiencies do keep improving. If those technological advances can be translated to a significant reduction in the levelized cost of electricity (LCOE) figure, it seems possible that CPV could catch up with regular PV in around ten years.

“High efficiency is one of the key drivers to make HCPV more cost-competitive on the LCOE level,” states the NREL/ISE report. “Hence the majority of efforts in research aim at increasing the efficiency at all levels from cell to module to system.” 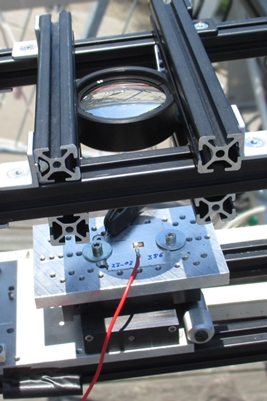 ISE sets record module efficiency
The latest milestone is a Fraunhofer-developed mini-module operating at an efficiency of 43.4 per cent – close to double that of the best-performing crystalline silicon modules. However, CPV systems need to be able to track the sun extremely accurately during the day, something that adds greatly to system complexity and cost.

Report co-author Andreas Bett is ISE’s deputy director and one of the researchers behind the record-breaking module. “This value is a new milestone in the history of CPV technology and demonstrates the potential available for industrial implementation,” he says of the development, which uses a single lens to focus light onto a tiny four-junction cell.

According to the joint report, the practical efficiency of CPV systems ought to approach 40 per cent in the long term. But with that performance level not anticipated until around 2030, at this stage it is unclear whether any commercial developers of the technology will survive long enough to turn that undoubted potential into competitive products.

Some of those commercial developers that do remain are working on next-generation versions of CPV technology under projects funded by ARPA-E in the US. Among the ideas under investigation are to use thousands of tiny microlenses and to integrate functions like concentration and solar tracking at the cell level.