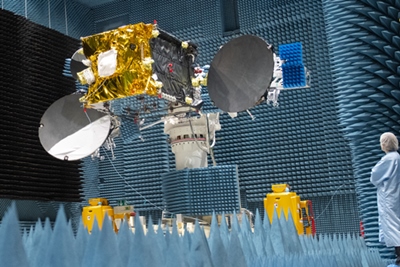 A new satellite featuring a laser communication terminal (LCT) is en route to its geostationary orbit, from where it is expected to double the capacity of the European Data Relay System (EDRS).

Once in position 36,000 km above Europe “ERDS-C”, as it is known, will connect with low-Earth orbit (LEO) satellites such as the European Space Agency (ESA) “Sentinel” Earth observation payloads that have been launched over the past few years.

Launched from the European spaceport in French Guiana late on August 6, EDRS-C joins EDRS-A in the network. In early 2016, EDRS-A became the first geostationary satellite to provide laser links in space, creating what ESA’s key project partner Airbus refers to as the “SpaceDataHighway”, and providing near real-time transmission of large data sets back to Earth.

Downlink delay solved
From the geostationary position, the EDRS satellites are able to transmit data at a rate of up to 1.8 Gb/s, and can maintain an almost constant connection with the LEO satellites - whereas from their much lower orbits, the satellites can only transmit data when in direct line-of-sight contact with their ground stations.

That line-of-sight window typically only lasts for around ten minutes of each 100-minute orbit, meaning that data is “stacked up” for later transmission - introducing delays of up to 90 minutes.

EDRS solves the downlink delay problem by connecting to the LEO satellites as they orbit, collecting transmitted data via the laser link before relaying it back down to European ground stations using a more conventional radio-frequency (RF) connection.

That means the LEO Earth observation satellite no longer requires ‘line of sight’ contact with its ground station to transmit data, with ESA saying that just one of the EDRS nodes is able to quadruple the LEO satellite’s effective contact time with the ground.

With the typically huge data sets that the various imaging instruments on board the Sentinel satellites are able to capture, the much wider transmission window means that high-resolution optical, infrared, and multispectral images can be received on Earth just minutes after they are acquired, rather than taking hours or even days.

In addition to that, ESA says that laser terminals can be lighter, consume less power, and offer greater accuracy and security than an RF connection. Each LCT takes around 55 seconds to establish a link between the GEO and LEO satellites, locating and locking onto its fast-moving target measuring just 135 mm in diameter from a distance of 45,000 km. 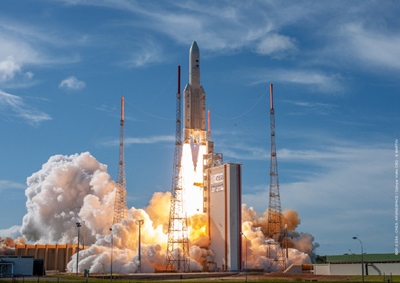 Slick oil detection
Since late 2016, EDRS-A has been regularly relaying images of Earth acquired by the four Sentinel observation satellites that together form the ESA’s “Copernicus” program, with minimal delay.

ESA says that, thanks to EDRS, delegates at a meeting held in Brussels last month were able to watch staff from the European Maritime Safety Agency analyze images of ships off the coast of French Guiana just seconds after the images had been captured by the Sentinel-1B satellite as it orbited.

“The team were able to pinpoint individual ships on a 60,000 square-kilometer patch of the Atlantic Ocean that was twice the size of Belgium,” ESA claims. “They checked the ships’ wakes for any evidence of oil spills – and found none on this occasion. The whole process took less than 20 minutes.”

The high-speed network should soon be augmented by data from the International Space Station (ISS), once the required optical hardware is installed on the outside of the ESA-built Columbus laboratory module, Europe’s main contribution to the ISS project.

Since deploying EDRS, ESA reckons that the Sentinel-1 constellation has been able to increase its data provision by around half, while the Sentinel-2A and -2B pairing is now able to map Earth’s entire landmass every five days.

With the addition of EDRS-C, the system’s capacity should double to 3.6 Gb/s once it is fully operational.

‘Paradigm shift’ to optical links
Designed, built and tested in Germany, the EDRS-C satellite weighs just under 3.2 tonnes and according to the German Aerospace Center (DLR), who built the payload, has a planned service life of 15 years.

Walther Pelzer from the organization said in a DLR release: “With the development of EDRS, we are making a paradigm shift towards an optically networked satellite infrastructure.”

Highlighting the much higher rates of data transmission now possible, alongside better security, DLR says that Earth observation satellites are able to provide an increasingly accurate picture of Earth, its environment, and its climate.

Following an extensive test and validation phase, the new part of the EDRS network should be fully operational by the end of 2019. As well as doubling the link's data capacity, DLR says that the new hardware could also increase the inter-satellite connection distance to 80,000 kilometers.