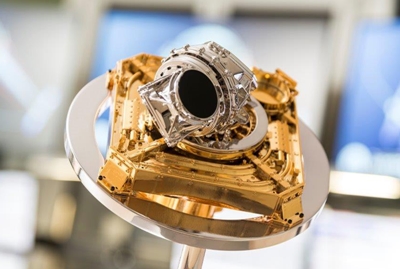 The first dedicated laser terminal forming a high-speed optical network in space is now in orbit, after a Proton rocket launch from Kazakhstan on January 29.

Part of the future “European Data Relay System” (EDRS), which the European Space Agency (ESA) describes as its “most ambitious telecommunications program to date”, the laser was developed by key partner Tesat Spacecom, an Airbus subsidiary.

Ahead of a series of missions to launch other key components between now and 2020, the EDRS 'SpaceDataHighway' is expected to support relay of 50 Terabytes of imaging data from space to Earth each day in close to real time, creating an entirely new market for commercial satellite communications.

At the moment imaging satellites in low-Earth orbit can only relay data to ground stations when they pass close by – but because the satellites can only “see” their ground station about 10 per cent of the time (about ten minutes of each 90-minute orbit) it takes several hours to deliver large data sets.

On top of that, most of the ground stations are in polar regions, meaning that the imaging data must then need be relayed back to Europe, adding another significant time delay and a reliance on other nations in which the remote stations are based.

In contrast, the first dedicated receiver station for EDRS is in Harwell, UK. It will receive data from the imaging satellite via the laser transmitter in its geostationary orbit – meaning that near-constant communication is possible. A radio frequency transmitter operating in the Ka band completes the high-speed link by relaying the data back to Earth.

Sentinel satellites to use EDRS first
Known as EDRS-A, the first laser transmitter “node” is set to begin relaying data later this year - initially for ESA and Europe’s two Copernicus Sentinel satellites, which are dedicated to Earth observation applications and offer data-heavy capability like multispectral imaging.

But first the EDRS laser terminal is scheduled to undergo a series of in-orbit tests, starting later this month. ESA’s own tests should be completed in May, ahead of link testing with the first users of the new space hardware.

EDRS-A is actually an autonomous telescope, fitted with mirrors to help the data-carrying laser lock onto satellites in low-Earth orbits from its geostationary position. That means it needs ultra-precise pointing stability to hit fast-moving targets from tens of thousands of kilometers away.

According to the EDRS partners, who include Airbus, its subsidiary Tesat and the German Aerospace Center (DLR), the final system will support bi-directional optical data transmission at a rate of 1.8 Gb/s. The RF relay will operate at 600 Mb/s.

Replay of tonight’s liftoff of Proton with #EDRS and Eutelsat 9B #spacedatahighway https://t.co/oK1KCZXVUY

€500M partnership
The EDRS program is the result of a €500 million public-private partnership between ESA and Airbus. As well as transmitting data between satellites fixed receiver stations on Earth, it will eventually be able to relay information from UAVs, surveillance aircraft and the International Space Station.

“SpaceDataHighway is no longer science fiction,” said Evert Dudok, head of the communications, intelligence and security division at Airbus Defence and Space, following the EDRS-A launch. “It will revolutionize satellite and drone communications, and help to keep the European space industry at the forefront of technology and innovative services.”

The laser technology developed by Tesat Spacecom is said to offer such precise pointing capability that two laser terminals located 75,000 km apart can be connected. Following the EDRS-A launch, another payload (EDRS-C) is in advanced development and should go into orbit next year.

Michael Witting, ESA’s project manager for EDRS, said at a press conference ahead of the EDRS-A launch: “The second [EDRS-C] payload features the same laser communication terminal for the inter-satellite link from the imaging satellite, to the EDRS satellite.

“Eventually, when the system is complete, we’ll have both EDRS-A and EDRS-C in [geostationary] orbit, allowing fast and efficient transfer of data, in near real-time, to the ground.”

Witting explained that the key enabling technology in the system is the laser communication terminal, which was designed by Tesat with DLR funding over a ten-year period. It weighs about 50 kg, and operates with a power of 150 W.

Plenty more EDRS candidates
Dudok added in the same press conference that all the systems ESA is now developing for use in satellites that have high data rates are “anticipating use of the laser communication terminals”. That could result in a large number of new laser terminals – ESA says that of around 400 of its low-Earth orbit launches currently slated for the next 15 years, around 80 are candidates for EDRS services.

In parallel, Airbus Defence and Space will validate the laser link concept between the EDRS-A terminal and an Airbus A310 aircraft later this year. US-based General Atomics is another key partner, and is developing the airborne laser terminal that should hook up to EDRS-A.

If all goes according to plan, EDRS-A will be positioned at 9° East and will be able to establish laser links with orbiting observation satellites and UAVs positioned over Europe, Africa, Latin America, the Middle East and the eastern coast of North America.

Airbus Defence and Space and ESA are also looking for partnerships to further expand the SpaceDataHighway by 2020, with a third “node” to be positioned over the Asia-Pacific region. The EDRS partners say that communication needs for airborne missions over the Pacific Rim region have risen dramatically in recent years.

Meanwhile the Copernicus Sentinel mission, backed by the European Commission, will become the first “customer” for the SpaceDataHighway. Its use will allow the Sentinel-1 and Sentinel-2 satellites, which are all equipped with laser terminals, to deliver large volumes of imaging data to Earth monitoring centers in close to real time.

“In case of crisis or natural disaster management, up-to-date, near real-time information is crucial for the authorities to prepare the most appropriate emergency response,” say the EDRS partners. Another use could see quasi-real-time monitoring of the Arctic region from space, helping container ships navigate more safely through the polar region. ESA says that the maritime sector is “crying out” for such capability. 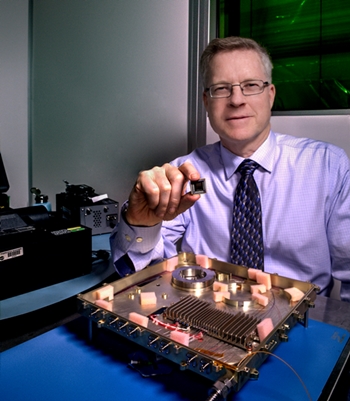 • Meanwhile NASA engineers say that they will begin tests on a new integrated photonics “modem” on board the ISS in 2020, as part of the agency’s own multi-year Laser Communications Relay Demonstration (LCRD) project.

Known as “ILLUMA”, the modem will – if planned tests go well - initially be used to test communications between geostationary and low-Earth-orbit spacecraft, just like EDRS. That capability may then be augmented with other functions like spectroscopy and surveillance.

Mike Krainak, who is leading the modem’s development at NASA’s Goddard Space Flight Center, said: “The technology will simplify optical system design. It will reduce the size and power consumption of optical devices, and improve reliability, all while enabling new functions from a lower-cost system.

“It is clear that our strategy to leverage integrated photonic circuitry will lead to a revolution in Earth and planetary-space communications as well as in science instruments.”