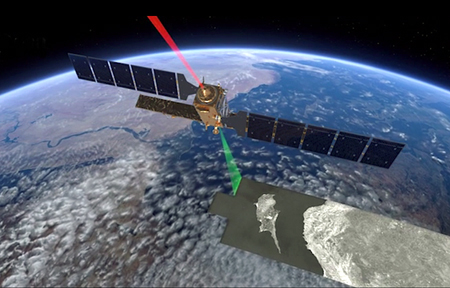 The Sentinel-1 mission is designed to be a two-satellite constellation.

Marking a first in space technological performance, satellites Sentinel-1A and Alphasat have been linked up by laser communication reaching almost 36,000 km through space to transmit images of Earth just moments after they were captured.

Scientists at project partner European Space Agency said, “this important achievement demonstrates the potential of Europe’s new space data highway to relay large volumes of data very quickly so that information from Earth-observing missions can be even more readily available.” Having timely access to imagery from the Sentinel-1 mission, for example, is important for numerous applications such as maritime safety and helping to respond to natural disasters, ESA continued.

Orbiting from pole to pole about 700 km above the Earth’s surface, Sentinel-1A transmits data to Earth routinely, but only when it passes over its ground stations in Europe. However, geostationary satellites, hovering 36,000 km above Earth, have their ground stations in permanent view so they can stream data all the time. This takes a great deal of coordination between the different teams working intensively. Later on, in routine operations, this will be fully automated.

Creating a link between the two kinds of satellites means that more information can be streamed to Earth, and almost continuously. Engineers have turned to laser to accomplish this.Funded by ESA and the DLR German Aerospace Center, Tesat has developed a laser communications terminal and downlink system that is carried on the geostationary Alphasat, Europe’s largest telecommunications satellite.

This novel unit’s counterpart is flying on Sentinel-1A. Over the past few weeks (November 2014) the Sentinel-1A operations teams at ESA’s European Space Operations Centre, ESOC, in Darmstadt, Germany, and ESA’s Earth Observation Centre, ESRIN, in Frascati, Italy, and German Space Operations Center, GSOC, in Oberpfaffenhofen, Germany, have been working intensively to prepare for the first laser link tests.

“Demonstrating laser data link-ups in space has involved excellent teamwork by many at ESA, Inmarsat, Tesat and DLR,” said ESA’s Head of Mission Operations, Paolo Ferri. “I am especially proud of the major contribution the operations teams at ESOC and ESRIN have provided to the success of this activity, which will significantly improve data availability from Earth observation missions and enhance benefits for all citizens in the future.”

Magali Vaissiere, ESA’s Director of Telecommunications and Integrated Applications, said, “Today, space systems have become part of the global Big Data challenge. You can visualize the link of today as an optical fiber in the sky that can connect the Sentinels back home to Europe, from wherever they are on their orbit around Earth. The link is operated at 1.8Gbit/s, with a design that could scale up to 7.2Gbit/s in the future. Never has so much data travelled in space.” 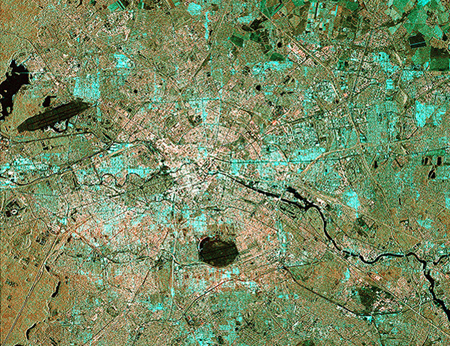 Image of Berlin taken from Sentinel-1A, transmitted to Earth via laser.

The Sentinel-1 mission is designed as a two-satellite constellation. The identical satellites orbit Earth 180° apart and at an altitude of almost 700 km. This configuration optimises coverage, offering a global revisit time of just six days.

At the equator, however, the repeat frequency is just three days and less than one day over the Arctic. Europe, Canada and main shipping routes are covered in less than three days. Designed and built by a consortium of around 60 companies led by Thales Alenia Space and Airbus Defence and Space, the Sentinel satellites are an example of Europe’s technological excellence.

Each satellite, weighing 2300 kg, has been designed for a minimum lifetime of seven years in orbit. The design has benefited from experience gained with Canada’s Radarsat-2 and Italy’s Cosmo-SkyMed and uses the Piattaforma Italiana Multi Applicativa, PRIMA, satellite platform with a mission-specific instrument, the C-band synthetic aperture radar in this case.

The principle of operation of the inter-satllite laser communication system is shown in the following video: